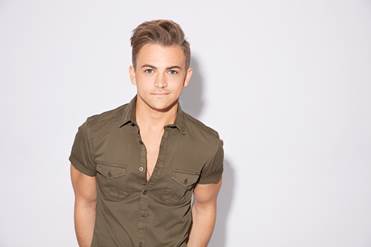 A self-proclaimed “geek” who has been tapped by Mashable as an “Artist That Backs Music with Digital Dexterity,” Hunter Hayes is constantly seeking innovative ways to interact with his fans and create unique experiences for them, whether it be at live shows or through digital platforms. In his latest collaboration with YouTube, out today, Hayes calls on virtual reality technology to invite viewers to step into the recording studio for a ringside seat as he builds each musical component of his current single, “Yesterday’s Song.” The cutting-edge technology allows fans to immerse themselves in a 360-degree viewing experience using YouTube’s new, state-of-the-art VR app currently available on Daydream view.

“Anyone who knows me, knows how much I love technology, and I’m constantly amazed by all of the things we can do with just the click of a button,” said Hayes. “The fact that we can bring fans into the room with us, so to speak, and actually share an experience with them using virtual reality technology opens up a whole new world for us. I’m excited to be sharing this video with everyone, and giving them a little glimpse into my world as we’re putting together this next album.”

“Yesterday’s Song,” which “has the raw, aggressive sound of a rock band” (Billboard) with “razor-sharp guitar work and a hook that would be illegal if it were a narcotic” (Taste of Country), is the first single from Hayes’ as-yet-untitled third studio album. For more information and the latest updates, visit http://www.hunterhayes.com or follow on Twitter/Instagram @HunterHayes and http://www.Facebook.com/HunterHayes.

About Hunter Hayes
Hailed as a “country-rock-blues guitar hero in the making” by the Los Angeles Times, five-time GRAMMY nominee Hunter Hayes is a singer, songwriter and multi-instrumentalist who roared onto the music scene with his double-Platinum-selling, No. 1 self-titled debut album and chart-topping sophomore album, Storyline, on Atlantic / Warner Music Nashville. With three No. 1 singles already under his belt (including the multi-Platinum smash “Wanted,” double-Platinum “I Want Crazy” and “Somebody’s Heartbreak”), and Hayes delved into unprecedented territory with the innovative rollout of new music via streaming and digital platforms in 2015, culminating in the release of a special, three-disc collection dubbed The 21 Project. While recording for his forthcoming third full-length studio album, Hayes surprised fans by releasing three new songs via social media (“Yesterday’s Song,” “Amen” and “Young Blood”) and his new single, “Yesterday’s Song,” is currently available at digital retailers and Country radio.