For those lovely C2C attendees who do not have any Official After Party tickets then fear not as C2C always have enough going on to suit everyone. Straight after the main stage shows doors open on the top floor of All Bar One for a special late night […]

Best of 2018 Rising Stars and Ones to Watch

In no particular order we have compiled a list of some of our favourite new artists we found in 2018 and some that we have loved a while and think will have a great 2019. Rachel Reinert – “Dark Star” Caroline Marquard – “Not A Rolling Stone” Smithfield […]

If you ask me who my favourite artists of 2018 were then Lainey Wilson would definitely be on that list. With traditional country being so rare in new artists these day, Lainey is a refreshing and welcome addition to the country music scene. Having been independent before signing […] 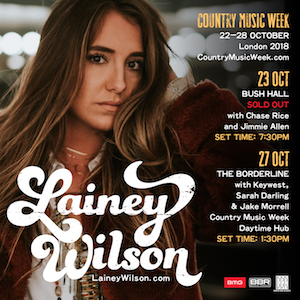 After a books worth of issues getting me to London and back on Tuesday October 23rd, I can safely say that it was worth it! It may have ended up being a seven hour round trip just to catch the support acts of someone else’s show (Chase Rice) […]

Hailing from the small farming community of Baskin, Louisiana, newcomer Lainey Wilson has as much grit in her as she does soul. She moved to Nashville in a camper trailer to pursue a career in music and has been carving her own unique place in the country music […]