Conceptualised by the Country Star, the Special Effects Heavy Video Showcases His Comedic Timing and Creativity 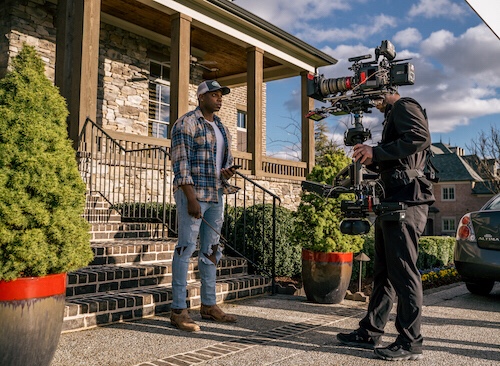 “I’m a huge fan of Disney, Harry Potter and ‘The Notebook.’ I wanted to create a video that showcased my love for all three,” Allen shared. “I feel like authenticity is celebrated today more than ever so with this video I really wanted highlight my quirky side.”

Shot in Franklin and Nashville, TN., the video CMT describes as “magical and positively effervescent” was conceptualised by Allen and directed by Justin Nolan Key. The special effects laden and often humorous video spotlights both Allen’s creativity and natural comedic ability. From a fairy godmother to a magic wand and a romantic love connection to dancing in the rain, the video shares a unique and magical narrative that gives fans a look inside Allen’s subconscious.

“I love that the video focuses on the action and the music is in the background,” Allen continues. “Enjoy Chapter 1! This is the first of a five-part music video collection. Thanks to everyone for going on this journey with me and stay tuned for more!”

“Make Me Want To,” which The Boot called “an infectious, romantic romp,” was the most added song at US Country Radio with 61 stations reporting in its first week and is currently making its way up the chart. Written by Allen with Paul Sikes and Jennifer Denmark, the song is the follow up to his debut No. 1 “Best Shot” – which received radio play across the UK including on BBC Radio 2 – and the second single off his Stoney Creek Records / BBR Music Group debut album Mercury Lane, an album Rolling Stone praises as “a sturdy, hits-packed collection that… challenges the narrowly defined model of what constitutes a next big thing in country music.”

Following his much-hyped UK performances at C2C Festival at the O2 Arena in March, the Delaware native recently wrapped runs in the US on Scotty McCreery’s Seasons Change Tour and Kane Brown’s Live Forever Tour, and hits the road again this summer as support on Chris Young’s Raised on Country Tour and Rascal Flatts’ Summer Playlist Tour.

The epitome of the phrase “persistence pays off,” Jimmie Allen laid it all on the line to make his dreams a reality. Now signed to BBR Music Group’s Stoney Creek Records, Allen’s debut single “Best Shot” is a certified hit, claiming the top spot as the No. 1 Most Shazamed song in the format for eight consecutive weeks, and the No. 1 spot on Country radio for three weeks, marking the first time a black artist has launched a career with a No. 1 hit with their debut single on country radio. On the heels of that historic success, Allen is back with his latest single, “Make Me Want To” which was most added at country radio in its first week with 61 stations.

“Make Me Want To” is the second single off his Stoney Creek Records / BBR Music Group debut album Mercury Lane released Oct. 12, 2018. Named in tribute to the street he grew up on and the origin of his incredible journey, Mercury Lane was produced by Ash Bowers and Eric Torres and features a cutting-edge mix of country, rock, R&B and pop that draws upon the influence of his family and small-town upbringing of the critically-acclaimed rising star. Rolling Stone raved Allen’s debut “challenges the narrowly defined model of what constitutes a next big thing in country music in 2018” and The New York Times dubbed it one of 2018’s strongest, calling it “a conventional country album, filled with songs about the small details.”

The Southern Delaware native’s talent for songwriting is undeniable, having written a song that was featured in a Super Bowl commercial and appearing in a Diet Coke ad with megastar Taylor Swift. “Blue Jean Baby,” off his debut self-titled EP, immediately caught the attention of country music fans and critics alike with its soulful groove— rocketing it to the top of digital playlists, across all genres. Allen recently wrapped his run on Scotty McCreery’s Seasons Change Tour as well as Kane Brown’s Live Forever Tour. He will also be hitting the road this summer as support on Chris Young’s Raised on Country Tour and Rascal Flatts’ Summer Playlist Tour. The hot newcomer was heralded as one of the top “artists to watch in 2018” by Rolling Stone, Billboard, Pandora, Sounds Like Nashville, NY Country Swag, Country Music Rocks and New England Country Music and has