With their eagerly anticipated third album Restless Minds ready to be released on October 5th – Ward Thomas had the much deserved privilege of playing on the main stage at British Summer Time – Hyde Park alongside Paul Simon on July 15th. Ward Thomas showcased a few of their new songs from the forthcoming album as well as fan favourites and proved their worth by performing to a very receptive audience.

We caught up with twin sisters Lizzie and Catherine to discuss playing BST Hyde Park for the third time but first time on The Great Oak Stage – we also discussed their new album, single Lie Like Me and much more.

Hi girls – How was performing on the Great Oak Stage here at BST just now because for me, that was amazing?

Lizzie – It was amazing, it was so surreal being on that huge stage and having all that space and seeing everyone in the audience – it was really really cool to be here. We still can’t quite believe that we were on the main stage – The Great Oak Stage.

Catherine – with those big old trees….

Lizzie – I was going to go right by the tree at one point.

Last time you were here you played The Barclaycard Stage so it must be so nice to have that “Jump” if you will, to the big stage?

Catherine – It’s funny because we were talking about how we have been at BST for three years in a row. We played with Carol King the first year and we were on the Summer Stage and then Tom Petty’s show last year we played on The Barclaycard Stage and now we have played the main stage this year on Paul Simon day which is pretty special.

Lizzie – It is pretty special.

You had a great crowd too, especially considering you were on relatively early….

Catherine – Yeah we were worried it would be empty – we were expecting there to be no one but we were very lucky.

It has been lovely to see you grow from independent artists, to signed artists to this.

This is the biggest stage you have played so far right?

Catherine – Yeah, I can’t imagine a bigger stage ever.

Neither can I and it is so well deserved. Put Pyramid Stage at Glastonbury on your bucket list next.

You have played Glastonbury already haven’t you?

Lizzie – Yeah, we have played the acoustic stage twice.

Lizzie – That was so great. The last time we played though I unfortunately got tonsillitis that week, but thankfully the pills kicked in, ha!

Catherine – We are so excited as well because we took our time with this album – we didn’t want to rush it in any way and we have been influenced by so much over the last few years, especially while touring Cartwheels. When we went in to the room to write this album we were very much concentrating on the fact that we just wanted to write good songs, we didn’t focus on genre in any way – we have written with very “Pop” writers, we have written with very “Country” writers and funnily enough, the most pop songs were written with the country writers and the most country songs were written with pop writers. We have always loved how country can be so versatile with different sub genres and it should never be discouraged – it’s always something that can enhance the genre and give everyone a point of view. Something that we have always held on to from country is the honesty in the songwriting and you can’t beat how you write a country song.

Lizzie – Also with this new album we wanted to let everyone have a little bit of everything on it from really country to rootsy to really simple harmony tracks and some really pop songs on there too. We have really experimented with the genres but we wanted to keep everyone happy too. 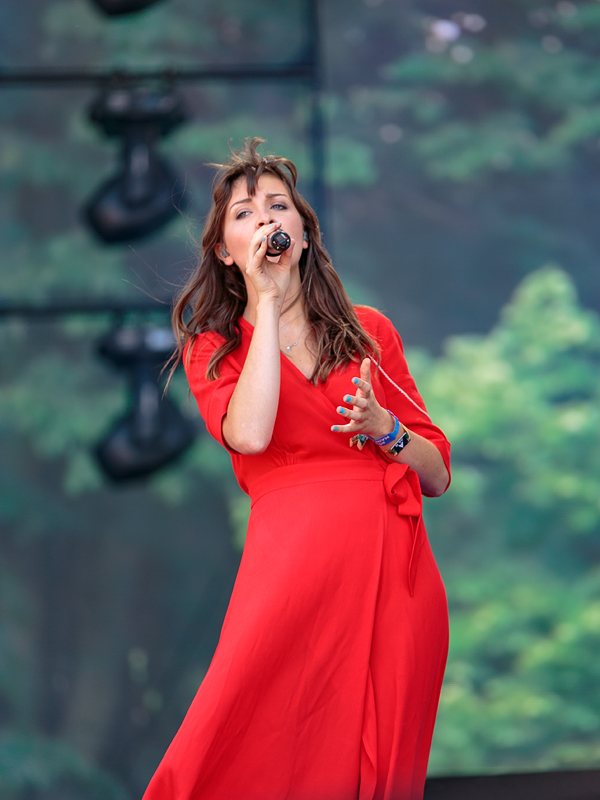 Who did you write with on this album?

Lizzie – We will always write with Rebekah Powell and Jessica Sharman, they are two of our closest friends. We wrote Lie Like Me and No Filter with them and so many more. Also, we have formed really great relationships with a girl called Rachel Further, Ed Drewitt  who are both really pop writers but we wrote quite country songs with them and then we wrote with Steve Robson, Jo Ginsburg and Emily Reed, Martin Terefe (who also produced a lot of the songs) and we also produced a lot of the album with a guy called Joe Rubel who is a young, up and coming producer in the world. He is great. We have learned so much with this record, we have really pushed ourselves.

You performed your new song No Filter for the first time ever today. Tell us a bit about that, is it the same theme as Lie Like Me where you speak about the false parts of social media?

Catherine – The title would suggest that and it very much is in a lot of ways. They both have a similar theme in terms of Lie Like Me being from the perspective of someone who feels like they need to paint this perfect paradise in order to be accepted into the world, which we all do, we have all done that and we wanted to point out that we don’t have to be like that, we don’t have to be perfect so No Filter is essentially on the other side of that coin where we sort of say we are going to throw all of that away and be super honest. We all feel like we have to change ourselves in some way to be accepted and to be successful in life and No Filter is about trying to make sure that we don’t do that and that we try to stay true to ourselves.

Lizzie – Yeah and not being shaped for who you’re not – the whole pre – chorus in No Filter is “I re position my hand ” like for the selfie thing to try and make yourself look good for someone else but also yourself. If you take all that away and put honesty in there, you will actually feel better about yourself.

Speaking of honesty and emotion too – at Black Deer Festival you were part of a special songwriters round and Lizzie, you got very emotional when Ashley Campbell sang Remembering.

Lizzie – I know, I am so emotionally run. I don’t know what came over me on that stage but that song was so emotional and I was like “Oh my gosh, I am going to cry in front of all these people”.

But that’s the beauty of songwriters rounds though.

Catherine – and writers rounds is the only place you ever get to see that type of reaction. That’s what writers rounds are there for, there’s no glamour and lights and perfect production, it’s just everyone sat there singing the songs as they wrote them and that’s normally when the tears come out.

I hope you do more songwriters rounds.

Both – Yeah, we would love to.

Lizzie – Songwriters rounds are definitely popular over here now for sure.

What song, from any album do your family and friends seem to like the most?

Catherine – Carry You Home is a lot of their favourites. But from the new album, One More Goodbye.

Is that one you are most excited for fans to hear too?

Lizzie – For me, One More Goodbye and No Filter are the two more kind of personal songs. Those are ones we connected with the most.

Catherine – Also for us, we get connected to new songs because we are writing about what we are feeling at the time. A lot of the time when we write something, it is almost like we have packaged all our feelings into a nice neat box and then let them all out. When we write about new feelings, sometimes the old songs then have a new meaning and we hear something different in them that we didn’t before.

Who are you listening to at the moment?

Lizzie – We are loving George Ezra’s new album – we love him as a person too. We love Kacey Musgraves new album too and Maren Morris.

Catherine – I think Maren Morris is really great because she is making waves in country music that haven’t really been done before, especially in Nashville. She is very young and cool and is breaking traditions but is still very country. She has helped open up country to a younger audience which is very exciting.

I agree. Thank you so much for talking to me today, I loved todays show and cannot wait for the new album.

Both – Thank you so much, was lovely talking to you.