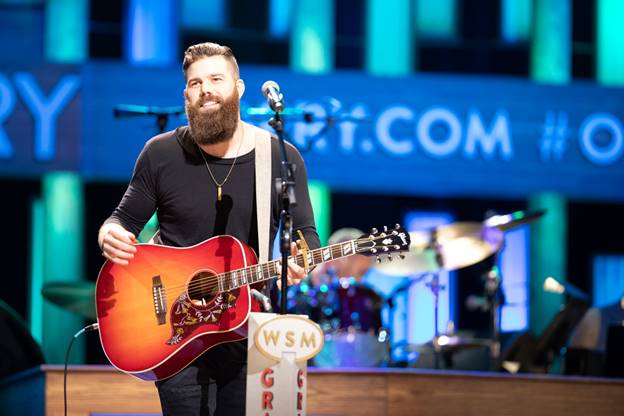 2018 Copyright/ Photo by Chris Hollo for the Grand Ole Opry

MCA Nashville’s Jordan Davis made his debut performance at the world-renowned Grand Ole Opry Saturday night. Performing “Slow Dance In A Parking Lot” and “Leaving New Orleans” off his debut album Home State, Jordan highlighted why critics and audiences alike have praised the singer/songwriter for “melding the songcraft of artists like John Prine and Jim Croce with the genre’s pop progressiveness” (Rolling Stone).

“To think of the history and the people who have stood here before me, it’s crazy,” says Jordan. “I want to thank the friends, family and everyone who has helped me get to this point.”

Originally from Shreveport, Louisiana, Jordan has made a strong impression with his classic lyric-writing melded with tech-tinged production. After graduating from LSU in 2012 with a degree in Resource Conservation, Jordan moved to Nashville and honed his songwriting craft influenced by his love of lyrically-driven songwriters and genre-defying musicality.

Jordan is nominated for “Radio Disney Country Best New Artist” at the upcoming Radio Disney Music Awards. In addition, Jordan continues to demonstrate his notable songwriting talent with a recent nomination for “Nashville Artist-Writer of the Year” from the Association of Independent Music Publishers after winning The Songwriters Hall of Fame’s Abe Olman Scholarship for Excellence two years ago. Past recipients of that prestigious award include John Legend and Bebe Rexha.

Earlier this year, Jordan made his national TV debut with NBC’s TODAY and “Late Night With Seth Meyers” which can be viewed HERE and HERE. The Louisiana native recently wrapped his first headlining “White Wine and Whiskey Tour” and will embark on Jake Owen’s “Life’s Whatcha Make It Tour” starting this Friday, March 18 at AT&T Field in Chattanooga, TN. Additional upcoming stops include SRP Park in Augusta, GA and UPMC Park in Erie, PA. For a full list of tour dates, news, images and more, visit http://www.jordandavisofficial.com