Afternoon tea? Country music? Small intimate tea room? All of this rolled into one? If I could have clicked my heels three times and said “There’s no place like Willow Bough” then I would have been there.

If you are a music lover and truly love to silently listen to the lyrics of a song and the vocals of an artist with a stunning, soothing voice then an acoustic intimate setting is the perfect location.

Norwegian-born, UK-based Liv Austen truly knows how to throw a special event for her fans. With her sensational debut album A Moment Of Your Time having just been released, Liv held a unique competition for her fans to join her for an album themed afternoon tea and acoustic performance at London’s Williow Bough Tea Rooms in Wimbledon.

Four winners in total in a small tea room that comfortably seats around 15 for afternoon tea, this prize was a “hot ticket”. In fact, if the event was ticketed they would have sold like “hot cakes” or shall we say “would have gone as fast as scones?” After all it is the fastest cake in the world (get it?).

Liv Austen is one of our most cherished country/pop singers at the moment and she will remain that way for a long time. Arriving at The Willow Bough Tea Rooms to A Moment of Your Time themed cup cakes and biscuits, fans were sat at tables as Liv chatted to them and answered questions. Shortly after, Liv and her guitarist performed a special acoustic set.

Of the event Liv says;

“I had been in talks with Willow Bough Tea Rooms for a while about doing this, and it was perfect to have it happen right after my album release. I asked fans what their favourite song from the album was and why, and had so many great replies! In the end I picked two winners, Esme and Justine. Justine brought her lovely friend Acacia, and City Cowgirl also joined us, to document the whole event. From the minute we sat down in the tea rooms we had so much to chat about, the girls were brilliant, so interested in music and really lovely to me and each other. Justine and Acacia even had a notebook with questions for me! They were such great questions – we didn’t even have time to cover all of them. The afternoon tea itself blew me away, there were chocolate cupcakes with amazing icing on top (with lavender, which I never knew I needed in my life, but I did!) and little “clocks” on top of them. There were shortbread cookies made to look like digital clocks, and also amazing scones and sandwiches. It was the perfect afternoon, in the most gorgeous tea room, and we didn’t want it to end. The girls each had their own favourite song, Esme picked Window Shopping, Justine chose Part Time Sweetheart, and Acacia loves Don’t Regret a Single One. We also had a Wimbledon-based magazine pop by, Darling Magazine, and we sang a couple of songs for them; The Next Time and a cover of Selena Gomez’ Back To You. I loved every minute and hope we can do it again one day!”

In a quaint tea room with an authentic British setting, the Willow Bough Tea Rooms really are your perfect location.

If you want to visit Willow Bough, visit their site here.

If you are interested in playing/booking at Willow Bough as part of an Afternoon Tea themed event please email us at hannah@boonevents.co.uk 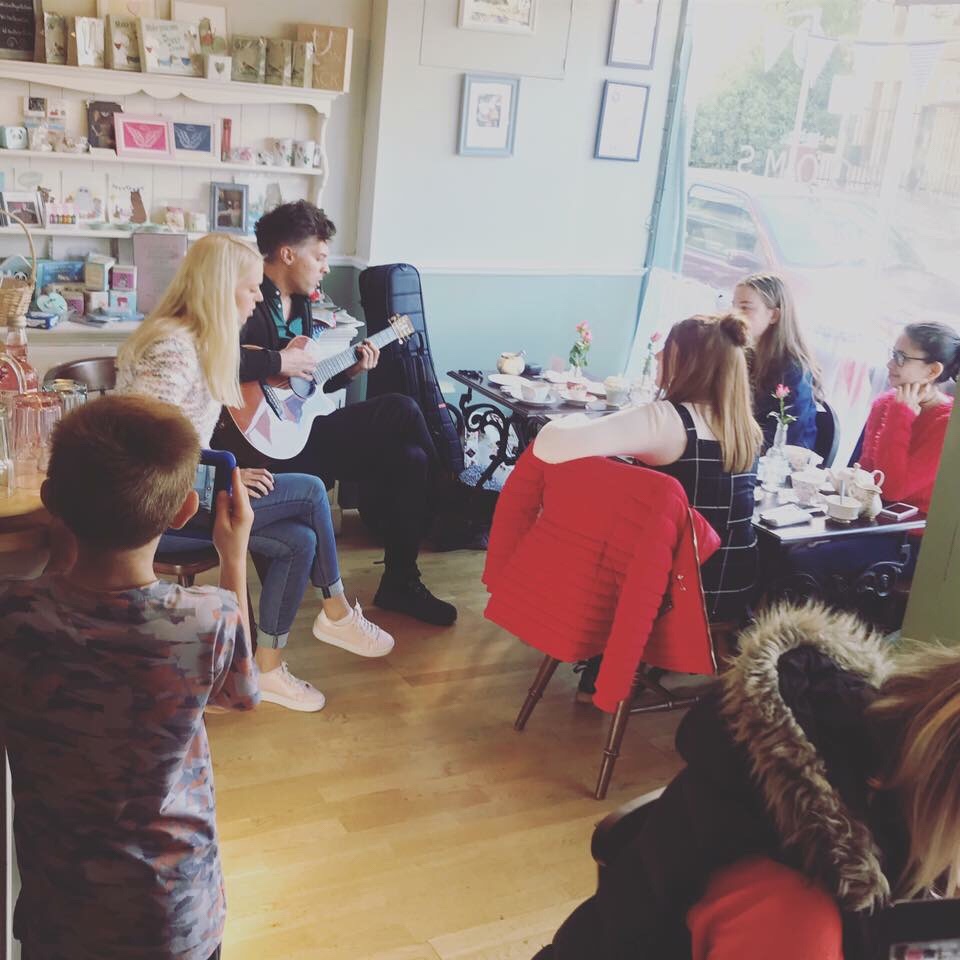