Darius Rucker is one of those artists that no matter how many times you see him live, he will never disappoint you. An artist with so much energy and joy, Darius will have you smiling from ear to ear for days after seeing him.

The Royal Albert Hall is a bucket list moment for any artist and Darius hasn’t kept quiet about his excitement to play there. As a fan, getting to see him play such an iconic venue is something we will remember as much as Darius will.

The hype and the energy surrounding the Royal Albert Hall was like nothing else. Looking around the sold out venue, every seat was filled from pretty much the time the doors opened. Fans of all ages and all genres were already having a good time and the show hadn’t even begun. The Royal Albert Hall wasn’t just taken up by country fans but there were a lot of Hootie and The Blowfish fans too and this created an even more wonderful atmosphere.

A vocal man on his love for sports, it was a perfect fitting when he arrived on stage to a public service/sports type announcement and of course the crowd cheered with delight.

When Darius enters the stage it is always with a bounce and a very happy feeling. Darius has a voice unlike any other, his unique, baritone and somewhat tangy tone is incredibly infectious. Always in perfect tune, we could listen to Darius sing all night long.

Darius began with his song Homegrown Honey from the album Southern Style. Now we love a bit of Darius dancing – he doesn’t exactly do a full on dance routine but his hip movement and finger clickin’ is always adorable. Radio always gets everyone up and singing but a favourite of mine is always Southern State of Mind as I love the homely lyrics and it always make me think of the southern states of America.

Darius excels in both his upbeat numbers and his ballads – his voice suits everything. Some of the tracks have a very anthem like feel such as True Believers and the fans always full on chant with the song, fist bumps in the air and all. As a Hootie fan, like many others in the audience, it wouldn’t have been the same show without Let Her Cry which Darius often describes as his first country song.

I always cry during It Won’t Be Like This For Long, no matter how many times I hear it, that song always has a new meaning as well as old as life throws more experiences your way.

A fan of Blackstreet, his No Diggity cover went down a treat and it is one of those really fun sing a long moments. Back to the Hootie era, Only Wanna Be With You really soared throughout the Royal Albert Hall and singing Dolphins Make Me Cry lyric is just a great engaing moment. In fact, Darius is always very engaged with his audience and as he even sold out the chorus seats behind the stage, they didn’t go unnoticed as he always checked in on them.

How can you not love the moment when Darius plays Alright? One of the best songs he has, there is no happier song live than this one. You would be hard pressed to find a fan that doesn’t know all the words and even the people who you wouldn’t often see sing along to a live show couldn’t help themselves. If we could have all danced around the hall to this song, we would have. Current single and Drivin’ N’ Cryin’ cover Straight to Hell was next and sadly no appearance from Jason Aldean, Charles Kelley and Luke Bryan – imagine if they did turn up though? I think there would be some paramedics needed for the amount of people passing out from over excitement. Alas, the song alone was brilliant, of course it was, it is Darius Rucker.

Darius brought out his support act Russell Dickerson for the Hootie track Hold My Hand which again, is always one of the best moments of the evening so to have Russell on it too was just the best and their voices really went well together. I was tempted to get on stage and hold both their hands, I mean, they did keep singing for us to haha!

Come Back Song was next, this is always fun to watch with his little dance moves, I love it! Darius then closed with Oasis cover Champagne Supernova in dedication to the Manchester Bombings victims at the Ariana Grande concert, that of course was emotional and also beautiful.

Darius wasn’t ever going to leave us without an encore and he retuned to the stage with a cover of Adele’s Someone Like You. Not many can pull that song off but Darius did. Darius did mention to us at BOON that he was going to do a special cover just for The Royal Albert Hall so perhaps this was it? And special it was.

He closed the show with Wagon Wheel as he often does but it is the perfect song to close with so we can’t exactly complain. The atmosphere is always alive when he plays Wagon Wheel and the fans are always fully energised.

Forget about Hugh Jackman, Darius Rucker is The Greatest Showman and what a show indeed! What a moment to remember and what a night both fans and Darius will treasure forever. I wish I could have been a fly on the wall to hear his reaction when he got off stage and spoke to his band, crew, friends and family about it.

We love you Darius, thanks for a magical evening! 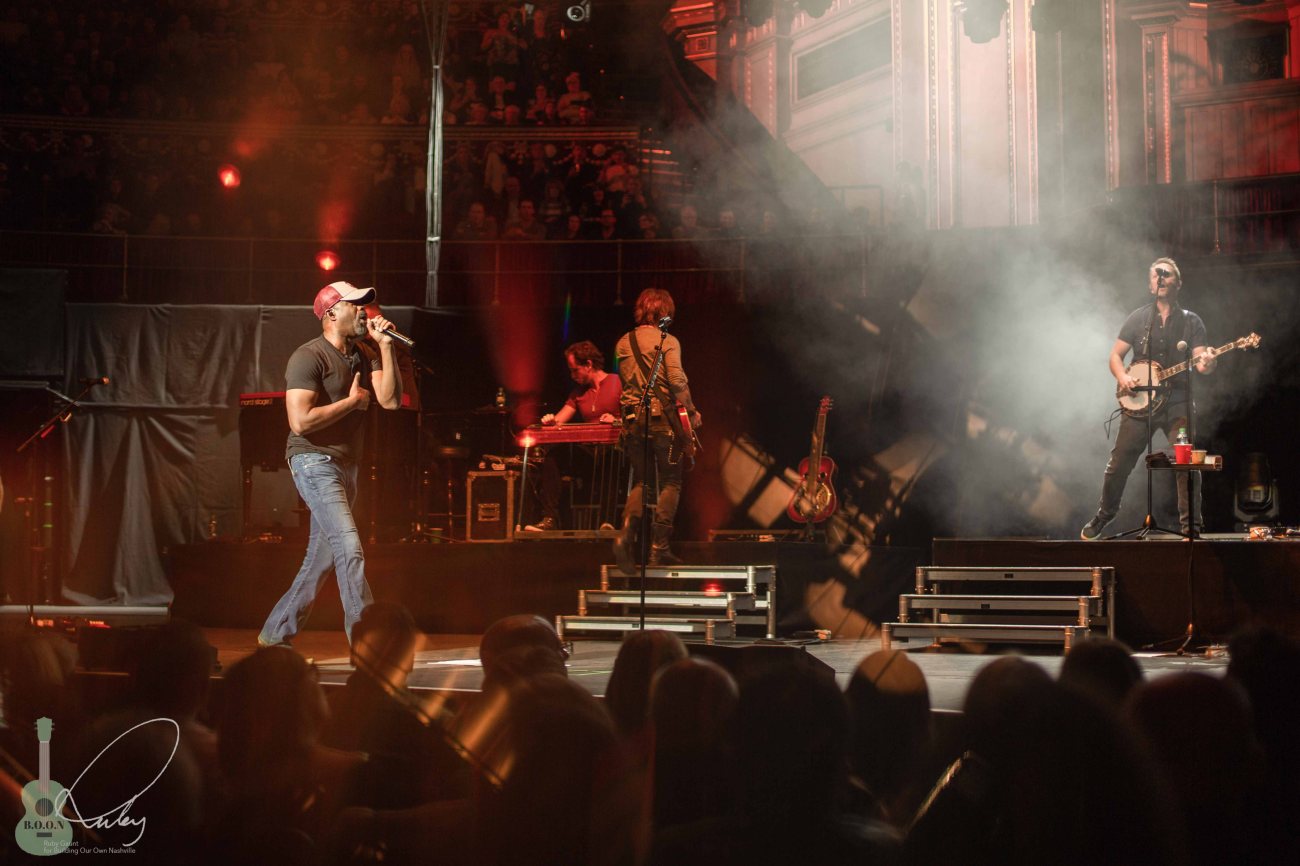