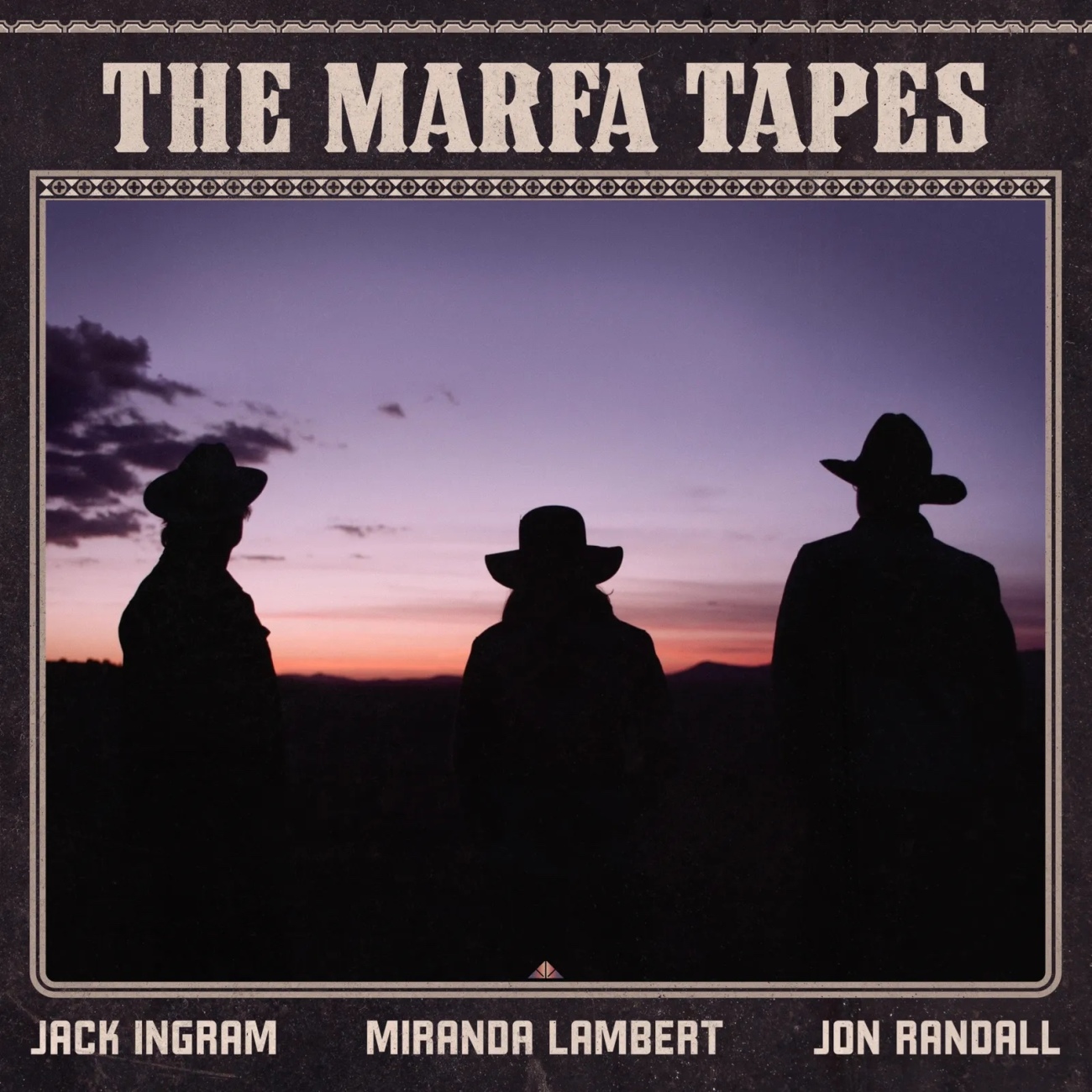 Watch The Video For “In His Arms”

Jack Ingram, Miranda Lambert, and Jon Randall announce their new album titled The Marfa Tapes. Out on 7thMay, The Marfa Tapes is a collection of beautifully intimate and raw songs written and recorded together in the tiny, middle-of-nowhere town of Marfa, TX. Watch the video for the first release “In His Arms”HERE.

The Marfa Tapes is available for pre-order HERE.

Barely a dot on the map, Marfa is an eccentric outpost in the midst of a vast expanse of nothingness, the perfect place to lose – or find – yourself. For Lambert, Randall, and Ingram, it’s both. Over the past several years, the desolate location has become a songwriting haven for the trio, yielding both massive hits and profound personal growth. When they returned for five days this past November though, they came not to write, but to record, capturing a captivating new album inspired by the stark beauty of west Texas and the deep, lasting bonds the three have forged there. Recorded raw and loose with just a pair of microphones and an acoustic guitar, The Marfa Tapes is a stunning work of audio verité; an intimate, unadorned snapshot of a moment in time fueled by love, trust, and friendship.

“I’ll never forget pulling into Marfa that first night at 4am,” said Lambert. “The stars were like nothing I’d ever seen before, just this endless blanket hanging so low you could reach up and touch them. I immediately understood why this place was so special.”

“There’s no TV, no radio, nothing to do out there but pour a cocktail, sit around the campfire, and talk,” continued Randall. “Eventually, that just inevitably leads to songs. There’s no pressure to write, but most of the time, the three of us can’t seem to help ourselves.”

The trio recorded much of the album outdoors, inviting the ambient sounds of the desert to seep into their live, bare bones performances, and the atmosphere is utterly transportive. While a couple of the tracks may already be familiar to listeners – ACM Song of the Year “Tin Man” as well as fan favourite “Tequila Does” – the vast majority of these songs have never been heard outside of Marfa. The result is a rare glimpse inside the creative process of three of the genre’s most accomplished writers and performers; a candid, unvarnished look at Lambert, Randall, and Ingram’s undeniable chemistry in its purest, most honest form.

“There’s something singular that happens in that moment of collaboration and creation, something you can never really recreate in the studio,” said Ingram. “Our hope with this album was to share a little bit of that magic with people.”

10) We’ll Always Have The Blues

Hailed as “the most riveting country star of her generation” by NPR, Miranda Lambert has spent much of her career defying expectations, balancing massive commercial success with a fiercely independent spirit that’s guided her every step of the way. Over the course of eight studio albums, the Texas native has managed to sell seven million records in the US alone, top the Billboard Country Airplay chart six times, and take home two GRAMMY Awards, 14 CMA Awards, and a staggering 35 ACM Awards (including a record-breaking nine consecutive wins for Female Vocalist of the Year). In addition to her celebrated solo output, Lambert has also released three critically acclaimed albums with Pistol Annies, her chart-topping trio with fellow Nashville songwriters Ashley Monroe and Angaleena Presley.

GRAMMY-winner Jon Randall began his musical career at the age of 20, when he landed a dream gig playing guitar with Emmylou Harris’ Nash Ramblers. Since then, Randall has gone on to considerable acclaim as a writer, producer, and solo artist with his fingerprints on countless country hits performed by everyone from Dierks Bentley and Guy Clark to Brad Paisley and Alison Krauss. On top of his Billboard chart-topping work in the studio, Randall has also garnered both CMA and ACM Song of the Year Awards, most recently for 2017’s “Tin Man,” which he co-wrote with Miranda Lambert and Jack Ingram.

A true songwriter’s songwriter, Jack Ingram’s list of admirers reads like a who’s who of modern country and Americana: Taylor Swift, Miranda Lambert, Patty Griffin, Steve Earle, Todd Snider, Little Big Town, Pat Green, the list goes on and on. Born and raised in Texas, Ingram spent more than a decade grinding it out in the trenches before landing his first number one in 2005. Since then, he’s taken home a pair of ACM Awards, landed CMA and GRAMMY nominations, and toured with everyone from Sheryl Crow and Brooks & Dunn to Brad Paisley and Dierks Bentley. His most recent album, 2019’s Ridin’ High…Again, was a critical hit, praised by Rolling Stone as “searing” and hailed by the Dallas Morning News as “a gloriously raw, sweaty record full of swirling dust and swagger.”