Interview: Lucy Spraggan talks about her 2020, new album Choices which will be released in February and much more

Like so many other people around the world, Lucy Spraggan’s professional life was pretty much on hold in 2020. Planned tours all over the UK and the rest of the world, including Australia, and a prestigious third appearance at Glastonbury, were all postponed to who knows when, and the release of her sixth studio album, Choices, was pushed back until February 26, 2021. But that’s not to say that 2020 had been quiet for Lucy, far from it, in fact! For starters, she’s continued to write and record new songs, including the singles Flowers, Roots, and Sober, all of which will feature on the new album, and all of which have accompanying videos. She’s also undertook a massive transformation in terms of her own health and fitness, after giving up drinking, and being motivated to start up her own fitness company.

Through it all, Lucy still seems to attract almost as much national press attention as she did when she first captured the imagination of the public eight years ago on X Factor in 2012, with her own original song, Tea and Toast.

Lucy has released five albums to date, starting with the independently released Top Room at the Zoo in 2011, followed by Join the Club in 2013 (her first major-label album), We Are in 2015, I Hope You Don’t Mind Me Writing in 2017, and Today Was a Good Day in 2019. They reveal a truly gifted lyricist and songwriter, well worth investigating further if you haven’t already done so.

For such an incisively observational songwriter who has always dealt in the realm of the deeply personal, 2020 has certainly left Lucy with no shortage of material to draw on, and doubtless we can expect to hear much more of that in her music, starting with the release of Choices in February. I recently had the chance to chat to Lucy about her new material, as well as life during lockdown, not to mention videos chock full of “motorbikes, leather, beautiful women, and fire”! I began by asking her why she decided to release a cover of t.A.T.u’s All the Things She Said earlier in the year.

“I’d done a cover when I was touring, I did 500 Miles. The absolute bonus of that is because it’s really difficult to get into the Spotify algorithm, and to get in Spotify’s face, it’s almost as difficult as it was ten or five years ago to get on national radio. So one way to do that is to do a cover and be put onto the Covers playlist. And if you own the masters, that’s when you make money from Spotify, so me and the producer decided to split the cost of the masters down the middle and release a cover to see what kind of traction it got, and it really worked. It gets you into areas of the internet that you wouldn’t have been in before. So we did 500 miles and All the Things She Said, and they’re pretty different, so I didn’t mind doing it as much. If somebody told me to do a cover, I’d tell them to fuck off, but on my terms, I was like, ‘Oh cool!’

Tell me about the writing process for your forthcoming fifth album, Choices.

“I had a few songs before lockdown for this record, but a lot of them I did in my house. Some of them I co-wrote with some friends of mine via Skype. I’d sit at my piano. It was a very different creative experience. There was no room for procrastination, because there’s nobody to be, ‘Oh, let’s go and do this,’ or ‘I’m just gonna nip to the cinema.’ So it was very different, but I guess that’s what pandemics do, isn’t it?”

Have you written anything yet about the lockdown and the pandemic?

“I don’t think I’ll be writing anything about my experience of the pandemic. We’re gonna have a flooded market.  For me, my experience won’t be very interesting. This album does, to a degree, because I’ve been doing a lot more exercising than normal. There’s a song called Run, because I’m running 40 or 50k a week at the moment. And there’s a song called Animal. I listen to Bollywood workout playlists while I’m skipping, and this song has like a Bhangra beat to it because of the music that I’ve been listening to in lockdown. So I guess it circles around my experience of lockdown, to a degree.

There’s a song called Roots, which is very, very personal. A lot of people ask me a lot of questions about my relationship, and as of this year, I’ve decided to not share as much of my personal life in as much depth as I have. I think I gave too much about my life away, so that too many people knew too much about me. It leaves you in a vulnerable place. So instead of answering questions for people, I’ve just said, “Roots is everything that you could possibly wanna know.”

I’d think if anyone could put a different spin on lockdown, it would be you.

“Well, on the last album I wrote a song called The End of the World, which is really ironic, because it has a real theme of this experience in it. And maybe for the next record, there’s been a lot of introspective thought during this, and mainly just about when things are held back from you, how actually you realise you don’t know what you’ve got until it’s gone, that old chestnut.”

The last album felt very expansive, very joyful. What can you tell me about the sound of this one?

“This one’s big. It’s got quite a ferocious attitude to it, in parts. The production’s done by Pete Hamilton, and the last two records have been Jon Maguire. They sound very different. There’s a lot of cross-genre, which I feel like I can get away with, because the defining thing really is the lyrics and my voice. You can identify them quite easily. I feel like it’s opened up this kind of cross-genre production. It’s full of attitude, this record. It’s very different.”

The video for your single, Flowers, features “motorbikes, leather, beautiful women and fire,” in your words! What was that like to film?!

(Laughing) “It’s totally fucking different! Like I was wearing a leather crop with leather trousers, absolutely ridiculous. I just think, for me, this is a bit of a social experiment, because I got sober and I got fit, as in physically athletic, and for me, it’s funny because I’ve done the whole career thus far being a kind of podgy, overweight girl that does her music and plays her guitar, and all this shit, which I love, and that’s my fundamental. And now, it’s really funny that I could go into this. I don’t feel comfortable wearing that stuff. I don’t want to look like that, or wear red lipstick and stuff, but my experiment is, how I’m perceived now, when I release this song, what difference there’s gonna be, because to go from one end of the spectrum to the other is gonna be really fucking amazing to live through, I think. I can’t wait! And all anyone wants to talk about is, ‘Oh, you look so different.’ I’m like, ‘For fuck’s sake!’” 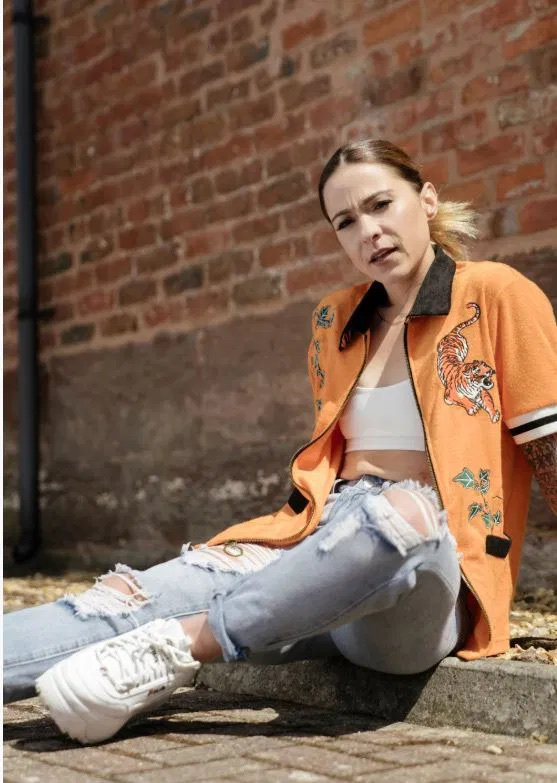 What effect has your sobriety had on your vocals and your songwriting?

“Being sober has made a massive difference for my vocal capabilities, which I just was unaware of, to be honest. So yeah, it’s naturally more melodic and it’s got quite a bit of oomph in it.”

It’s just so much more creative. It’s in everything. I’m more productive in general. All my ducks are in a row, and it’s not just music. I’m starting up a gym brand, and I’m doing a fucking fitness DVD, which is absolutely hilarious. It’s so funny. But I’m also doing a non-alcoholic beer range. It’s made me so much more productive, and thankfully so has music.”

Your mum’s an author (Anstey Harris). What sort of an influence has she had on your songwriting?

“Oh, she claims to have written half of my songs! She says that to me (she chuckles). She is convinced that she came up with the ending for Tea and Toast, which is not true, because it’s actually a fucking true story. But she read to us a lot when we were little, and she’s always had a very imaginative stamp on everything, and she’s very eccentric. I think to have somebody who’s involved in a literary sense is really important for a fledgling writer.”

I love that she claims to have written a lot of your songs!

“Oh, it’s so funny! She just talks out of her arse! But it’s brilliant!”

How much are you missing touring and seeing your fans?

“So much! It’s nuts, you know. I’m definitely an extrovert, and I crave that interaction with people, and I really miss that. I’ve been watching YouTube videos of our shows!”

You previously toured with Melissa Etheridge. What was that like?

“It was amazing. We went across Europe and the UK, and I did her cruise from Florida to the Caiman Islands. She just is an amazing person. A real icon. She really took me under her wing. I stay in contact with the family now. She’s great.”

What did you learn from watching her on stage and talking to her?

“She’s the best live artist I’ve ever seen. And I think, not that I didn’t already know it, but it’s that you have to just give your all in every performance. I watched her doing that, and she’s like 55 or something, and it’s fucking incredible to watch that energy. She’s been doing it for 30, 40 years. It’s crazy.”

Finally, have you got a message for your fans?

“Just thanks to anybody that’s been in touch during lockdown, and I hope everybody’s doing alright.”

Check out LucySpraggan.com for all the details.