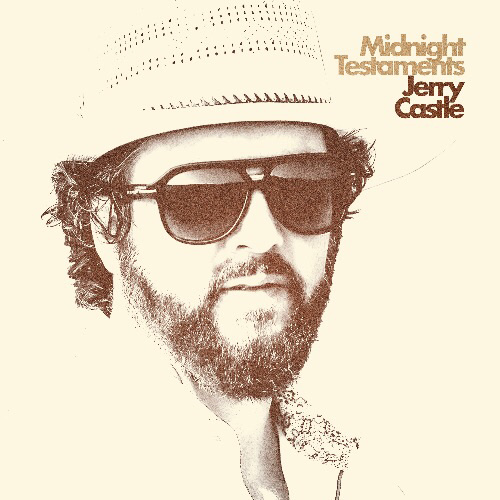 Jerry Castle’s brand-new album, Midnight Testaments, is out today, Friday October 16. The intriguing blend of what he calls Appalachian Soul reflects his roots growing up in a rural town in the Appalachian Mountains, but it certainly doesn’t stop there, with the 11 tracks taking the listener on a musical journey as rich and varied as his own travels and quest for adventure. He’s been touring and releasing music independently for several years now, culminating in this latest collection, which many are saying is his finest work to date, and which also features Amanda Shires on a track called Charades.

BOON recently had the chance to speak to Jerry about the album, as well as finding out how he’s been getting on in lockdown.

opening track, Tequila and Tears. What a great guitar sound!

Was it recorded under lockdown?

Make Do, the second track, and the next single, was recorded under lockdown, but the rest of the record was recorded at the end of last year. We intended to put it out in the spring of this year, and then the lockdown happened. We started delaying it, and trying to figure out what the hell we were going to do. So most of it was not recorded during lockdown.

You’ve said that you recorded Make Do after sort of reaching the end of your tether in lockdown.

Yeah, it was kind of in lockdown and just trying to figure out what to do next, how it was going to work. And then it was just having the realisation of, “You’re not in control of this, dude!” (he laughs) So, Make Do was kind of about just making the most of the hand you’re dealt, and having fun along the way, as much as you can.

Do you find you go through waves of ups and downs, sometimes feeling okay, sometimes not so okay?

Yeah, pretty much. Pretty much. (he laughs). It’s like everything is an extreme now. In the very beginning it was like, “Well, you don’t have to go anywhere, or do anything.

It’s okay to drink at noon.” And then after you do that for a couple of weeks then it’s like,

“Well, this is a lot of fun, but I don’t think my kidneys and liver are going to survive this.”

So then it’s like, “Well, I’m going to get in shape!” Everything is exaggerated. You’re either real happy, or real sad, or real motivated, or very, “Ah, to hell with it, none of it matters.” And it’s still like, “What in the hell?” Bizarre times indeed. Who knows where it all ends up?

And the very strange thing is, the international interest just began on this album, and we had things lined up in the UK, as well as Australia, and then this happens. The people that I talk to that facilitate all of that say that spring 2021is kinda what everyone’s shooting for. But nobody even knows that. So, I’ll “make do.”

I’d like to talk about the animated videos that you’ve released for some of the songs from the new album, namely Pick Up Your Guitar, and Calm. They look amazing. What was the thinking behind those?

Well, I had never done an animated video, and obviously, with quarantine happening, I couldn’t shoot videos in the normal way that I always had before. So, I obviously figured out that doing animation would be a route to go, but any quotes I had ever had on animation videos before were like way out of my cost range. And so I scoured the internet. Google was my friend here. And I ended up finding a guy in Nepal, his name’s Deepak. I sent him a message and told him what I was looking for. He said, “If you can lay out exactly what you want, exactly how you want the storyline to go, and storyboards to go, then I can make it happen.” No problem on that, I have no issue on overly describing what I want artistically! (he laughs). Most people are like, “Yeah, yeah, yeah, let me do my thing.” So, I sent him the storyboards, I think Pick Up Your Guitar was the first one, and he sent back just like a sketch of like, “Okay, so this is how you want it to go.” He hadn’t made anything like really slick yet. I was like, “Yeah, that’s exactly it.” And so I did Pick Up Your Guitar with him, and when it came to release Calm, it still was really frowned upon to be doing videos here in town, for that type of video too, because we needed lots of people in it, and so I did another one with him. Same deal. Just laid out exactly what I was looking for, storyboard-wise, and he did the whole thing in two weeks.

You’ve got all these different influences in your sound. You’ve got your really strong Appalachian roots coming through with quite a dark, edgy feel. You’ve also got the Bakersfield country influence with the guitar sound, also the Texas country influence, as well as the soul influences. How does that all work itself out in your music?

You know, that’s a good question. I think that Appalachian mountain, that dark sort of thing, that is so ingrained in me that I don’t put any thought into that coming out. As a matter of fact, I’ve done some other records, like my 2018 record, the whole intent of it was, “You know what, I am going to do something that is not roots. There’s not going to be any roots in it. I want to learn how to program, and I’m going to do something as an experiment. Do something else.” And so I learned how to program, and I programmed these drums, and I wrote this concept record, and it’s so funny, the Appalachia part still comes out. I listen back to it and it’s not the typical the Bakersfield, the Texas, it’s not as country, but you can still hear that underlying Appalachian sound.

Growing up there, as far back as I can remember, gospel, and bluegrass, I don’t remember a time in my life that didn’t exist. And I didn’t start playing until later in life. I was 20 by the time I started playing. I think collectively, that all kind of bleeds into one sound. I left home at 17, and travelled around the US quite a bit, and I lived in Hawaii. I went from the Appalachians to living on the beach in tropical areas. I went from the mountains to like, “Oh, wow!” From a very conservative, closed area to areas that are very liberal and open. So I think that too had something to do with collectively melding the sounds together.

And somewhere like Hawaii has its own mysticism as well, something deeper going on under the surface, hasn’t it?

Exactly. It’s very cool. I can’t believe I’ve not been back. When I left there, my thought was that I was going to go back to the mainland and get some things together and move back, and I never did. I ended up living in the Venice Beach area years later, which is, besides having a body of water, it’s a lot different than Hawaii. But yeah, the mysticism aspect of Hawaii is really cool, and I’m sure some of that stuck with me. The Appalachian Mountains are like that too, though. The mysticism aspect of it.

Why is that? What is that all about? Is it just the mountains?

There’s some of that. Definitely the mountains have something to do with that. So when I first started, I knew, as far back as I can remember, I wanted to move away from the Appalachian Mountains. Like, “When I grow up, I’m getting the hell out of here.” And then when I started leaving, I had a hard time. I would get really, really homesick, and I couldn’t figure out what it was. And then Hawaii was the first place I was like, “Aah.” And I was like, “Why is it? What is it about Hawaii?” And I think it was the mountains. You know, Hawaii is actually a mountainous area as well. And as far as the Appalachian Mountains, the mysticism, there’s something about the mountains. There’s a magical aspect of it, and, as you mentioned, there’s like a dark aspect to it.

The town that I grew up in, it’s really like the tale of two different worlds. Like you have some wealthier people, like doctors and lawyers. I had friends that grew up in that environment, but I had friends that were like backwoods as hell, too. Never came out of the mountains, and really could kind of live off the land and survive without any outside influence. My grandfather was born and bred there and has lived there his entire life. He dropped out of high school when he was 14. I was really close to my grandparents, and he was a big hunter and fisherman, and so literally, he would go an entire winter, and every meal was food that they had saved from growing in their garden, or deer meat, or fish. Again, selectively living off the land somehow ties into that, I think.

I also wanted to ask you about the last song on the album, Charades, which features Amanda Shires. How did that come about?

That’s actually one of the few co-writes on the record. It was written with a guy named Mando Saenz here in town. And the guy that ended up recording it ended up contributing to the co-write as well, Chad Brown. I knew Amanda through some other people here in town, and just reached out to her. She happened to be in town. Asked her if she was up for coming in to play on the record, and she came in and that was pretty much that. We had a mutual friend out in Texas named Bonnie Whitmore, who’s an artist also, and Bonnie was playing with her for some live shows. When I first met Amanda, Bonnie had her to come and play some live shows with me here in town, so I knew her from that.

Finally, you mentioned that you were planning to play some shows in the UK before everything was cancelled this year due to the pandemic. Have you got a message for the UK fans?

Just hang in there with me, you know. Follow me on all the socials, or on Spotify. The UK is a priority right now for us, so as soon as I can tour, obviously I’ll get out around the USA and kick the rust off just a little bit to get started, but the UK is our priority right now.

That’s really great to hear. We really look forward to that. There are going to be some amazing shows when everyone finally gets to play again, aren’t there?