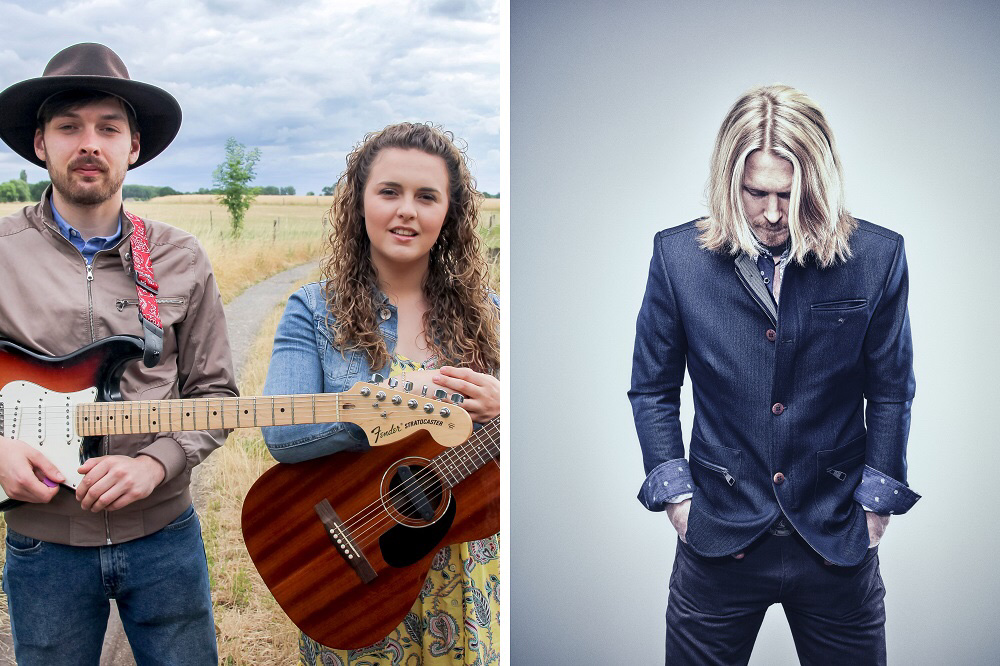 The third year of The Nashville Meets London residency series kicked off tonight at PizzaExpress Live in Holborn, introduced by the festival’s co-founder Peter Conway. Just as the name indicates, the series is designed to showcase the best new (and sometimes not so new!) talent from both Nashville and the UK, in the intimate setting of the basement PizzaExpress venue.

First up we had Bishopbriggs-based singer-songwriter Katee Kross and guitarist Ross Barron, who impressed as tonight’s UK representatives. Blessed with powerful, emotionally charged vocals, and accompanied by Ross’s country-blues-tinged guitar riffs, Katee performed several songs from her latest album, Show Your Hand, including the title track, as well as Never Meant to be Forever and Diamonds in the Dust. All were very well received by the audience, who also got to sing along enthusiastically on a couple of cover versions, including When You Say Nothing at All and That’ll Be the Day by one of Katee’s biggest influences, Buddy Holly. So loud was the communal singalong that Katee even said that the London crowd were better singers even than the Glasgow crowds, which is praise indeed!

With four full-length albums released to date, Katee had plenty of other material to draw from, including previous single, Bluebird, a hauntingly beautiful song about feeling the comforting presence of a loved one who has passed away. Simply outstanding, and very moving. All in all, a hugely enjoyable opening set, and Katee and Ross surely won over many new fans tonight. Be sure to check them out if you can, they’re bound to be playing festivals throughout the summer.

Next it was time for the Nashville section of the evening! You only have to see Kenny Foster play live once to be amazed that he’s not yet playing much bigger venues and arenas on a regular basis. It surely must only be a matter of time before he graduates full-time to bigger stages, but in the meantime, we get to enjoy seeing him perform up close and personal in intimate venues such as this.

Heralded by Rolling Stone magazine as “One of ten new country artists that you need to know,” Kenny famously never has a setlist planned out, presumably because he wants to see where the music, the mood, and the audience take him. It turns out that tonight he was in the mood to open with a few snippets from the Beatles’ With a Little Help From My Friends, which then segued into Made from his 2017 album, Deep Cuts, a song about the value of the simple pleasures in life.

Kenny’s shimmering virtuoso acoustic guitar work is another aspect of his live show that impresses just as much as his stunning vocal abilities, which enable him to convey such extremes of emotion with such a delicate breathy tone at one end of the spectrum, and at the other, soaring to the heavens on songs like Revival.

Kenny Foster is the epitome of country cool, in terms of songwriting, charisma, vocal technique, musicianship, and the art of performance, from the tip of his fingerless gloves to the brim of his fantastic hat. Like all the best country music raconteurs, he knows exactly how to have his audience wiping away tears of laughter one minute while moving them to tears the next. He’s just such a great storyteller, not only on one of his best-known anthems, Stand, a song designed to unify in turbulent times, but also when he chats to the crowd between songs, whether it be cracking jokes about such topics as songwriting in Nashville (“waking up at the crack of 10”), or the cheeky, witty, wordplay of Safe Word, where the crowd gets to hiss like the cracking of a whip (yes really!). Kenny also showed his more serious side, however, particularly when talking about some of the new songs that featured in tonight’s set, including one called Copy, Paste, Repeat, which was all about growing up in a small town with dreams that were ultimately unfulfilled (“Sounds like hell to me”). I really can’t wait to hear this new material when it finally sees the light of day! The final song tonight was a rip-roaring cover of Garth Brook’sCallin’ Baton Rouge, sending everyone home with big fat smiles on their faces and warmth in their hearts. For the first time in what has felt like a very long winter, it really feels like spring is on the way, and who knows, maybe we’ll get to see Kenny at a few festivals once summer finally kicks into gear! Don’t miss him if you get the chance.

Overall, a great way to kick off the 2020 Nashville Meets London presents season. March will have to be something special to live up to this!