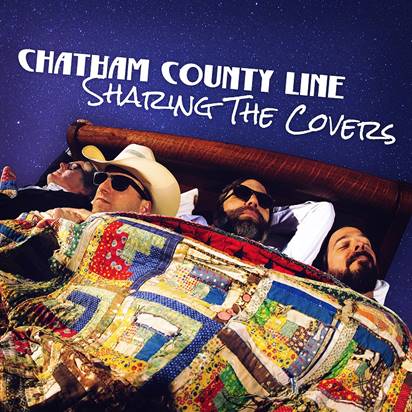 Watch video for first single: I Got You (At The End of The Century) Video

“Sure, the harmonies and instrumentation are pure bluegrass. The songs, however, are infused with a pleasing pop sensibility.” — Twangville

Hailed by Paste magazine as ”bluegrass innovators,” Raleigh, North Carolina-based quartet Chatham County Line will release their eighth studio album, Sharing The Covers, March 8 on Yep Roc Records. The video for the first single, Wilco’s “I Got You (At the End of the Century),” premiered today and is now available at all streaming services.

Paying homage to Wilco on the first single, the band revitalizes the song with a bluegrass vibe complete with a splash of banjo and underscored by the twang that immediately marks the song with Chatham County Line’s signature stamp. 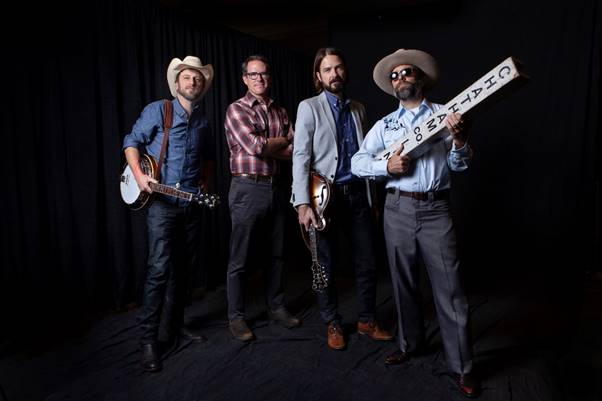 “This Wilco tune is a prime example of how Sharing the Covers pulls cover songs directly from our set lists through the years. We had performed this tune back in 2005 at the release show celebrating our second album, Route 23, and hadn’t really revisited it since. When we were setting up in the studio to record some new material, the engineer asked us to test the levels on the microphones and somehow this song came out. We are still in awe of the great job Wilco does in creating moments in the studio… they are a great inspiration for any band attempting to weather the years.” — Dave Wilson, Chatham County Line

Recorded at Durham, NC’s Overdub Lane studio, where they cut their first album, 2010’s Wildwood, and a few tracks from 2016’s Autumn were recorded, the 13-track collection was engineered by Chris Boerner, who also engineers the band’s live shows. Taking the familiar and adding a touch of bluegrass, the band creates an inventive collection of classic covers by Tom Petty, John Lennon, The Rolling Stones, The Louvin Brothers, Beck, and more.

Formed in 1999, Chatham County Line—Dave Wilson (guitar/vocals/songwriter), John Teer (mandolin/fiddle/vocals), Chandler Holt (banjo), and Greg Readling (bass/pedal steel/piano)—acquired their name after one of their very first practices when the then—unnamed group—were trying to find Holt’s place in Chapel Hill and got lost. “We crossed the Chatham County line, and we never looked back,” Wilson says. “Just saw the sign, and said that’d be a good idea for a name, and the next thing you know.”

Chatham County Line has never been shy about crossing borders. Birthed from country rockers Stillhouse in 1999, the Raleigh, NC-based quartet initially referred to its sound as new traditional, “We were in love with bluegrass, so we wanted to play bluegrass without really being trained in it,” Chatham County Line’s vocalist/guitarist Dave Wilson says. The group used the term “guerrilla bluegrass” to describe themselves in those early years, mainly because they had such a mobile form of playing.

“We don’t need electricity to do anything, so we would play on street corners everywhere. We just thought we were kind of a traditional band as far as instrumentation.” But Wilson says they only got away with that for a short while after their eponymous 2003 debut, on a quest to find their own voice. ”We’re rock and roll kids, and we came to it for the love of the genre and the style of performing.” He insists that nobody who knew bluegrass ever thought they were a ‘grass band. “We’re kind of an Americana band without drums, or a rock and roll band who doesn’t plug anything in.”

The band’s name comes from one of their very first practices when the then—unnamed group—Wilson on guitar, vocals, and harp; John Teer on mandolin and fiddle; Chandler Holt on banjo; and Greg Readling covering bass, pedal steel, and piano duties, were trying to find Holt’s place in Chapel Hill and got lost. “We crossed the Chatham County line, and we never looked back,” Wilson says. “Just saw the sign, and said that’d be a good idea for a name, and the next thing you know….”

CCL still has all its original members. Ned Durant briefly replaced original bassist Readling when Readling left to play with Tift Merritt, but Readling stepped in after their first album and has been there ever since. ”I don’t know if that means none of us are good enough to get a big head and go out on our own,” Wilson chuckles. ”No telling what the impetus is, but we’re still together and still share hotel rooms when it comes time to do it.”

They’re also sharing covers for their latest Yep Roc outing. The band has always included one or two covers in a live show, and for years fans have been coming to the merch table after the shows asking which album they can find a particular cover on. Tired of telling fans they might be able to find it on YouTube, a break in their touring schedule gave them their chance to remedy the problem. The band went back to Durham’s Overdub Lane studio where they cut their first album, where 2010’s Wildwood was mixed and where a few tracks for 2016’s Autumn were recorded, under the guidance of engineer Chris Boerner, who also engineers their live shows. “Next thing you know, it’s got a funny picture of us on the cover and it’s gonna come out,” Wilson says.

The 13 covers give a nod to an unruly pile of artists and genres, from Del Reeves to Carter Stanley to Tom Petty with room for the Louvin and Delmore Brothers as well as the Rolling Stones. Del Reeves’ 1965 hit “Girl On The Billboard” sounds like a Roger Miller tune with a hint of early Elvis slipped in. Wilson slows down the delivery a bit, making it a smoother vocal glide, harmonizing on the chorus with Teer, punctuated by the chop of Holt’s banjo. Wilson kept hearing the song on a classic country station when he was puttering around the house, and started playing the song at sound checks. “I learned it kinda daring myself to learn it to get all the words in my head.”

“Lay Down My Old Guitar” was written by Alton Delmore and first released by Delmore Brothers in 1933, with the Louvin Brothers covering it in 1960. “Obviously the brother harmony has a been a huge influence on the band with John and I singing together all these years,” Wilson says. “We do not listen to a bunch of bluegrass in the van when we’re driving around the country, but we will definitely listen to the Louvin Bros and the Everly Brothers and Delmore Brothers, those brother harmonies are so amazing. And from the cradle, it’s always been a great inspiration.” The band cut “Lay Down” for a previous album and Wilson says it’s still lying around on tape somewhere, but they remembered how to play it and decided to mix up the genres a bit, substituting piano for grass instruments, leaving the Delmore/Louvin harmonies intact. “Greg’s a great piano player, and he’d never played it on piano. I was like ‘Hey, man, sit down on the piano and let’s do this.’ We used hand signals to get through it. That was the first or second take.”

The group tackles the Louvin Brothers’ “My Baby’s Gone,” slowing it down, doing it a pace that sat naturally with Teer and Wilson rendering it like a hymn. ”We went back and listened to the Louvin version after we’d recorded it and we realized it was so much faster, but it works for us,” Wilson says.

Wilson channeling Bill Monroe sitting in for Mick Jagger on the Stones “The Last Time” is pretty unsettling but cool as hell, his soulful moan at the end of each chorus sounding like it was grafted from an Everly brothers cut. “The Stones are a big influence on the band in funny little ways,“ Wilson admits. “I’ve got stacks of records here at the house all percolating upstairs and I guess downstairs as well, and that kind of radiates through all the tunes.”

John Lennon’s “Watching The Wheels” sounds more like Tom Petty doing a bluegrass version of the former Beatle’s 1980 tune from Double Fantasy. The inspiration for recording the tune comes from a CCL appearance at Shakori Hills a few years back, on Lennon’s birthday. Wilson always had a cover in mind to do at the last second, and it ended up being a great unintentional diversion for the band, because worrying about how the show was going goes out the window when everybody’s trying to remember how to play the one brand new cover they haven’t really mastered. “We just kind of muffed it but went through it, but I just remember feeling so good singin’ it. John was such a magnetic presence and how we lost him it just felt right to pay tribute to John. It was time.”

The band paid tribute to Tom Petty on “You Don’t Know How It Feels,” Wilson channeling Petty’s vocals perfectly. “We didn’t mess with that one. The arrangement he did on Wallflowers was perfect, so we just did it in the same key, same arrangement, everything. You don’t mess with the master,” Wilson says. Carter Stanley’s “Think Of What You’ve Done” is accelerated to warp speed, with a frenetic, aggressive banjo attack.“That was Chandler’s doing” Wilson laughs. “He’s always pushing us to do a tune like that, and he really wanted to put that on there, and we got behind him and played as fast as we could.”

James Hunter’s 2006 release “People Are Gonna Talk” may not be familiar to American fans, but it’s appeal crossed all the lines, an Irish singer who sounds like Sam Cooke doing a reggae tune. Wilson and the band’s’ harmonizing is bluegrass soul, an old-time gospel choir. ”We really enjoy singing together, finding that blend and voices in harmony. There’s not a product you can buy at Guitar Center that does that. There’s not a button that creates those tones that Bill Monroe used to talk about. That’s something that just comes from doing it a lot and people working together in harmony. I feel like that’s one of the best attributes of this band.”

There’s only one instrumental, a cover of the Ventures’ ’64 hit “Walk, Don’t Run. ”It’s quirky and cool enough to start a new surfin’ banjo craze. “We’re on Yep Roc and they’ve got Los Straitjackets, and we’ve hung out with those guys and it’s so good, Chandler got addicted to their albums at one point a few years back and would bring in all these guitar instrumentals on the banjo.” Wilson and the band felt like there were enough shredding bluegrass instrumental covers like Tony Rice’s flatpicking tutorial “Red Haired Boy” so people don’t really need to hear CCL try to do it when you can hear Tony Rice do it a little bit better. That’s probably our little niche there,” Wilson says.

Even though not expressed in their own words, Sharing The Covers is a heartfelt thank you to loyal CCL fans. “This is kind of a scrapbook of all the years that Chatham County Line put on wax for the fans,” Wilson says. “We hope people enjoy it. We don’t make a lot of money putting out other people’s songs, but we kinda just want it for sharing the snapshots.