Cornbury Festival – Country music, an all – female line up, a wonderful atmosphere and more – Live Review 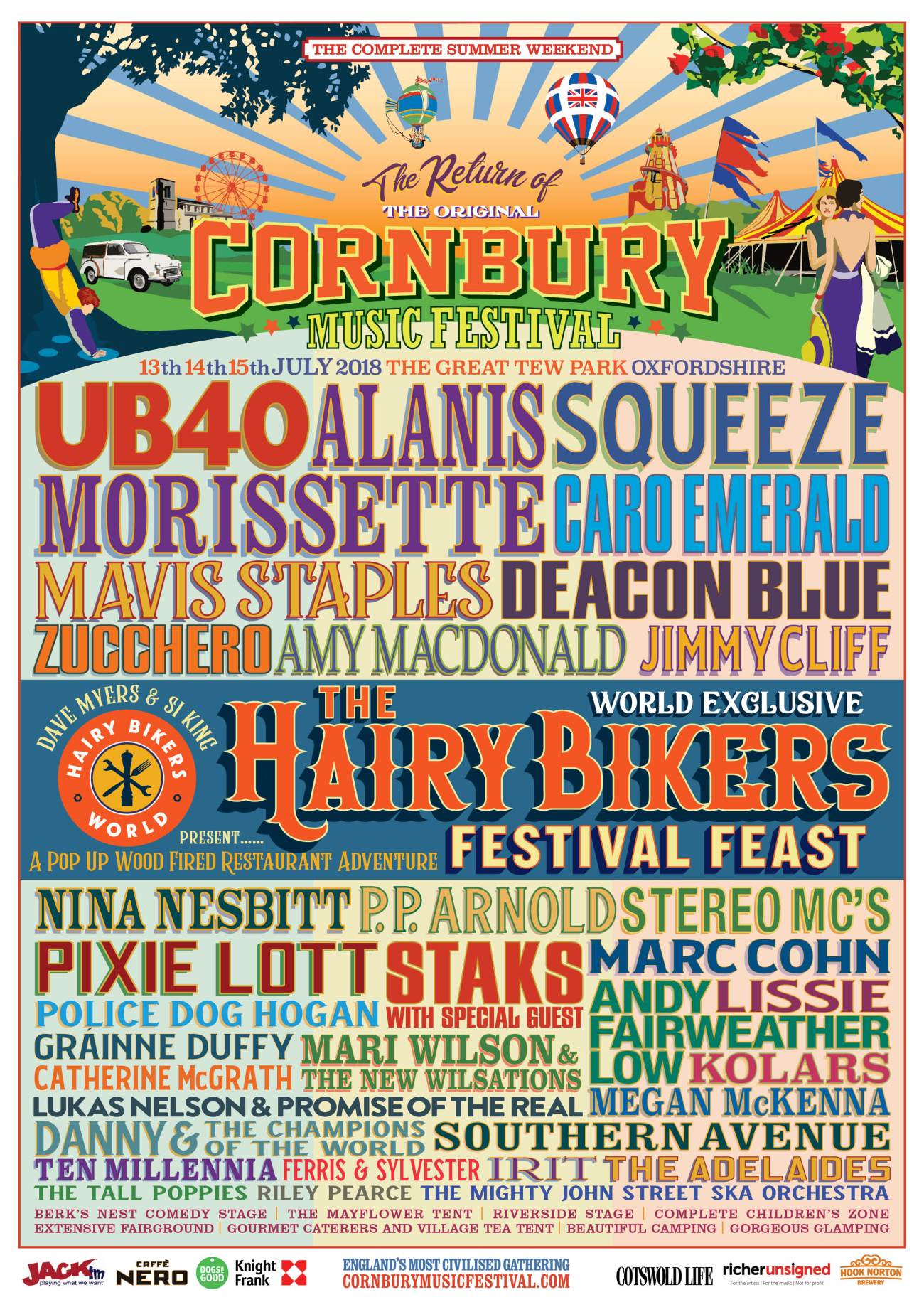 Cornbury Festival is one of the more special festivals that the UK has to offer. Big enough to get some impressive headliners and smaller enough to not be too overwhelmed – Cornbury is the perfect event for great music, good fun, family enjoyment and a laugh with your friends.

It was such a sad day when we thought Cornbury Festival had closed its gates for the last time in 2017. After a strong and emotional farewell at last years event, dedicated fans, celebrities and more campaigned to bring the much loved festival back and back they certainly brought it.

This years festival line up was not just impressive but it was important. With a great line up on the Friday that included Americana acts Danny and The Champions of The World, Lukas Nelson & Promise of The Real, Stereo Mc’s, Jimmy Cliff, Zucherrro and UB40 it was the idea behind Saturday that caught a lot of interest. With the current music market, Radio and festival line ups being more male dominated, Cornbury quietly announced an all – female line up on the Saturday which included UK country trio The Adelaides, Country singer Megan McKenna, Pixie Lott, Nina Nesbitt, P.P Arnold, Mavis Staples, Amy McDonald and a heck of an impressive headliner in Alanis Morisette. Having Alanis Morisette on the line up was something I for one never would have expected, imagined or dreamed. For me, seeing Alanis live was something I had waited 23 years for. (More on her set below).

Sundays line up continued the country music streak with UK rising star Liv Austen , Country/Folk UK duo Ferris & Sylvester and Irish star Catherine McGrath. As well as the country artists the line up included Staks, Marc Cohn, Deacon Blue, Caro Emerald and headliners Squeeze. The variety of genres on the Cornbury bill are always so impressive that they cater for everyone.

Cornbury isn’t just about the music though, it has a comedy tent, a fun fare, pop up coffee shops and this year an ‘exclusive’ pop up restaurant from The Hairy Bikers. With all sittings sold out, The Hairy Bikers were a ‘once in a life time opportunity’ experience. The most special thing that Cornbury can boast though is its atmosphere, there is just no where quite like it. With the festival being tagged as “Posh Stock” it really needs to be tagged with “Polite, laid back and comfortable stock”. Although it doesn’t quite have the same ring to it.  The atmosphere really is so incredibly laid back, easy, comfortable and lovely though. Whatever time you turn up at whatever stage, you will be able to see and have plenty of space. This is not down to a poor turnout but simply down to the fact of a respectable crowd. There is no pushing, no one hogging the barrier for the entire day and a lot of people just sit and chill until the music starts.

Taking a walk around Cornbury, there is enough food variety to meet everyones needs and prices? …not so bad actually. I found the best value for money was the 10” Stone Baked Pizza – a Margarita was only £6 and easily fed two. Still strolling, you will find old fashioned Ice Cream Vans, a helter skelter amongst big fair ground attractions, a kids area with lots of activities and so much more.

Do bring the kiddies, there is so much room for running around, a safe environment, the kids area and a separate area for kids camping.

One important factor at any festival is its toilets and as a toilet snob, I have to say Cornbury do it well. Across the entire weekend we never had any issues with blocked toilets, queues or any nasty surprises. 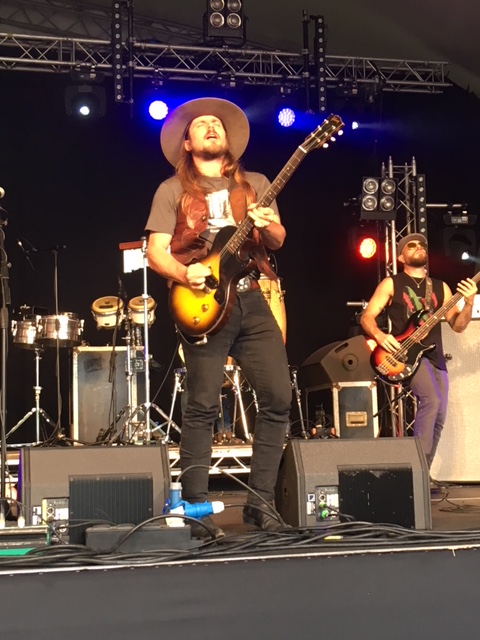 Lukas Nelson & Promise of The Real

We were only able to be present on Friday and Saturday sadly. The music we caught across the weekend started with one of our favourites Lukas Nelson & Promise of The Real. A US country/americana/blues/rock group, this band are one of the best live acts you will see. On early, they were met with a busy crowd and completely rocked the stage and set the bar high with their strong material and Lukas’ infectious vocals. Full review here.

Danny and The Champions of The World Played the main stage with their brilliant americana sound. The band were outstanding musicians who played a magnificent set which included tracks off their current album Brilliant Light.

Jimmy Cliff had the crowd with his well known, up beat and fun ska/reggae sound and the energy of the crowd was unbelievable. Reggae Night was perfection and the audience were in their element.

Saturday began with up and coming UK country trio The Adelaides. Abi, Alicia and Paris impressed with the best set I have ever seen them do. The trio performed a fresh, exciting set which included a lot of original material such as Jack Daniels and the clever “leave it up to you to guess what the song is about” Jelly Baby. The girls connected with each other and the audience a lot more than in past performances and their confidence was noticeable and their banter was fun. The girls harmonies blend beautifully together and this was the first time that I thought “wow, these girls are actually going to go far”.

TV star turned singer/songwriter Megan McKenna was next. If there was so much as one doubter who thought a tv star couldn’t do well as a singer then they were soon proved wrong. Megan McKenna more than impressed with her quirky personality, her stunning vocals and brilliant crowd interaction. A born to be singer, Megan stopped me in my tracks with her confidence, professionalism and music. Full review here.

Pixie Lott took to the main stage and drew a large crowd. Treating fans with her hit songs such as Mama Do, Boys and Girls and more, she danced around the stage and was full of energy.

Amy McDonald really took me by surprise. Not being much of a fan years ago, Amy showed me that I have been wrong all these years. A great set, Amy’s voice is perfection and she and her band really were quite sensational. Playing tracks such as This Is The Life, she was just as good live as she is on CD.

The night closed with the phenomenal Alanis Morisette. As I mentioned above, this was a moment that I had waited 23 years for so expectations were high, there was fear she wouldn’t be good and to say I was excited was an understatement.

Skipping on stage and breaking straight into All I Really Want she had us singing every word in full force, we were lost in her set the entire time. Everywhere you stood you had a good viewing point and Alanis delivered throughout her performance. In a way, I think I am kind of glad I waited this long to see her and not perhaps in her prime because she put in so much effort, she was incredibly grateful, relatable and we just felt connected with her. Alanis played ALL the hits. Remembering every word to every song as if we were straight back in 1995, we sang loud and proud to Right Through You, You Learn, Head Over Feet, Hand In My Pocket, Forgiven, Mary Jane, Ironic, You Oughta Know and Wake Up. Wake Up was her closing number before returning on stage to sing a breathtakingly beautiful version of Uninvited which you simply could not fault. At moments during her set her voice was a bit wobbly but I can only imagine that was down to the amount of running about on stage she was doing as Uninvited was one of the most stunning live moments that I have ever experienced. Ending the night with Thank U, another flawless performance, we left stunned, emotional and ecstatic. Alanis, Thank U for not killing a life long dream, we are now head over feet over your performance and you oughta know that it was perfect.

Thank you Cornbury for yet another amazing year, you are one of our highlights and line up aside, we will always come back simply because Cornbury is like a home to us and we don’t ever want to be without it.

Tagged as: Cornbury, Danny and The Champions Of The World, Lukas Nelson, Megan McKenna, The Adelaides