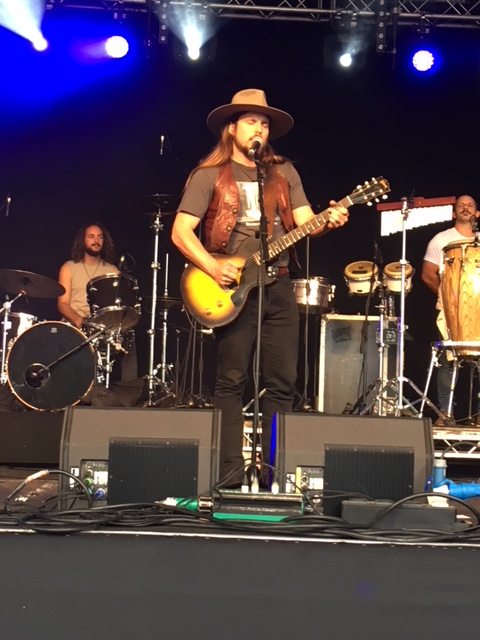 Lukas Nelson & Promise of The Real have had a busy schedule this week. Playing the main stage at British Summertime Festival, headlining a sold out show at The Garage in London, playing various other shows across the UK and then today playing the Songbird Stage at Cornbury Festival.

14.30 was Lukas & POTR stage time at the Songbird stage which is situated at one end of the festival site. Arriving early, I managed to score front and centre at the barrier and was surprised with the low turnout just moments before they were due on, however, this is Festival etiquette as people are busy seeing other artists and will then roam to the next artist as soon as they can.

The band were met with quite a few technical difficulties which postponed their set by approximately 20 minutes, however, by this time the crowd around me started to grow rather rapidly and it was nice to see that Lukas & POTR would walk out to a more than sizeable audience.

Right from the start they had the crowd. The powerful sounds of the guitars, the Jazzy sounds of the keyboard, the sweet rhythms and shakes of the percussion, the funky bass and the beat of the drums alongside Lukas’ soulfully raw vocals soared throughout Great Tew Estate and already they could be pegged as one of the artists of the entire weekend. The unfamiliar audience were in for a treat for sure as were us fans, even though we may have had experienced a Lukas Nelson & POTR show before, no two shows are the same.

There’s something about an intimate show isn’t there? This set felt as if we were all in some small venue somewhere rather than in a field at a festival, suddenly any surrounding sounds were way off in the distance and distractions were non existent. We were lost in the music.

Songs such as Die Alone and Fool Me Once got everyone moving and the mix of genres across all his songs made for a very good and diverse set catering for the variety of music tastes that the crowd had. POTR completely blew the roof off with their exceptional skills, each one of them having a moment to shine. There is something about the bass which always pulls me in and the way the bassist played with such ease reminded me of what a great instrument it really is.

Something Real always gets a wonderful reception and the sheer volume of the live performance of the song was exciting, fun and energetic. The bluesy/country Forget About Georgia pulled at the audience’s heartstrings – I had never heard an audience react quite like they did when he firstly, told the story of the song and then performed it. The crowd listened to those words and sympathetic “aww’s” were given from the females.

Find Yourself was as strong and thunderous as ever with real husky and powerful vocals from Lukas and Set Me Down On A Cloud reeled even more people in with its infectious guitar riff intro and soulful chorus. A lot of fun was had during the cover of Paul Simon’s Diamonds on The Souls of Her Shoes and Lukas even gave us a bit of a dance, he was certainly enjoying himself.

The set closed with an encore of Build a Garden – a new song which has not yet been recorded but was a massive crowd pleaser with it’s smart and at times comical lyrics but more importantly inspirational and beautiful message making the audience feel quite emotional and pensive.

The entire set sensational, energetic and almost perfect. There were even some Made In Chelsea cast members in the audience.

Worth the twenty minute wait due to technical issues? You’re damn right it was.