The Shires had a big surprise in store for their fans at their album signing at HMV Oxford Street last night. Arriving in style in an American style police car, The Shires played homage to the theme of their music video for their new single ‘Guilty‘ and blared the track from the sirens as they arrived on Oxford Street.

Crissie Rhodes and Ben Earle turned up to HMV Oxford Street handcuffed to one another in black and white convict t-shirts. The Shires were assisted from the vehicle by their chauffeur, an American cop.

Crowds of fans gathered to watch the band give an exclusive performance at their album signing, celebrating the release of their third album ‘Accidentally on Purpose‘ which was released on Friday.

Since it’s release on Friday, ‘Accidentally on Purpose’ has been battling it out for the number one spot in this week’s UK Album Chart, with only a few hundred copies separating this week’s top three. The album is BBC Radio 2’s Album of the Week and ‘Guilty‘ is the second most played song on Magic. The Shires are fresh from appearing on BBC Breakfast on Monday and will be performing on The One Show tonight. 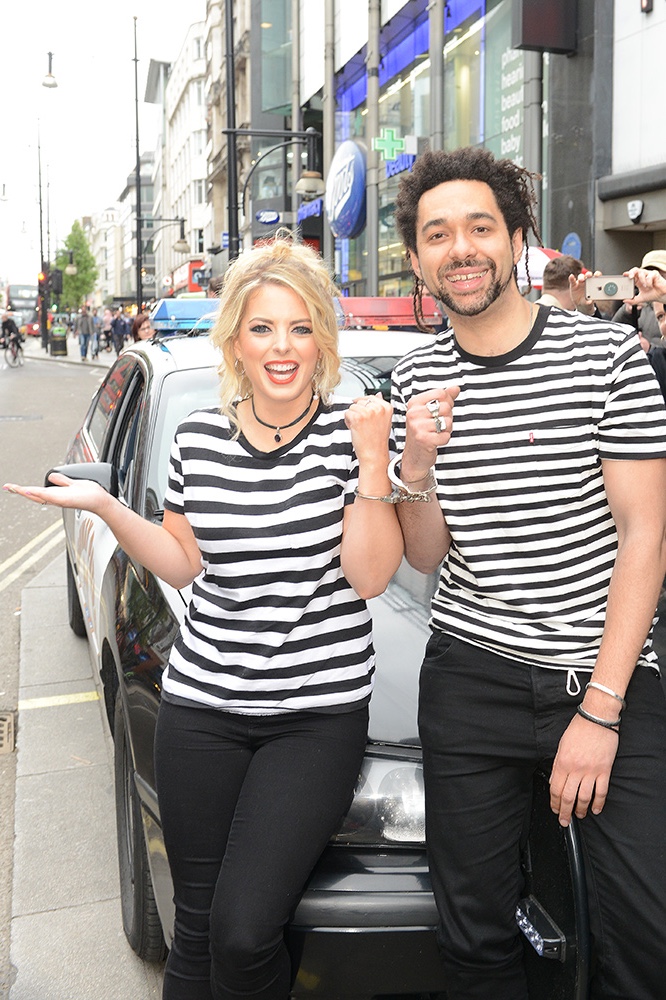 This isn’t the first time The Shires have brought Country music to the streets of London; last week Stetsons appeared on iconic statues across the capital to celebrate the release of their new album ‘Accidentally on Purpose’.

Recorded in Nashville, Tennessee, The Shires’ new album combines massive Country-pop choruses and emotive words about their whirlwind journey, relationships and their time in the States. Increasingly, US Country music is taking influence from the mainstream with pop-inspired hooks, a sound that The Shires’ new album reflects.

“Our new album ‘Accidentally on Purpose’ is full of personal songs that really sums up the whirlwind journey we’ve been on together. From the day we met, we’ve been crazy dreamers with big plans, who really believed that Country could break into the UK mainstream. For all those dreams, we never imagined it would all happen so quickly and we’re so proud and excited to be releasing our third album.”  Ben and Crissie, The Shires

The new album features a track written by Ed Sheeran, a beautiful anthemic love song called ‘Stay The Night’ which was written by Ed after he met the band on a night out in America.

‘Guilty‘ the first single released from the new album has been BBC Radio 2’s Record of the Week and is currently on the A List.

After an incredible two years, Ben Earle and Crissie Rhodes – hailing from Hertfordshire and Bedfordshire – have fast become a firm favourite in the music world. And now they’re making their mark in Nashville too.

The trailblazing duo will also be hitting the road this summer, performing their new music across the UK, including London’s Royal Albert Hall on 18th May.

UK Country superstars The Shires first entered the history books in 2015, when their debut album ‘Brave’ became the first ever British Country album to enter the UK Top Ten. Their second album ‘My Universe’ also broke new ground by becoming the fastest-selling British country album of all time and reached the top three in the UK chart.

After an incredible two years, Ben Earle and Crissie Rhodes – hailing from Hertfordshire and Bedfordshire – have fast become a firm favourite in the UK Country music scene. And now they’re making their mark in Nashville too.

With two Gold certified albums under their belt within 12 months of each other and 9 playlisted tracks across BBC Music, The Shires are back and they’re raring to go. They will be touring the UK from 12th May to 10th June – performing at venue across the UK including London’s prestigious Royal Albert Hall.

Ben and Crissie met on Facebook and were spotted performing in a Bedfordshire pub. They quickly signed to a manager and a record deal with Decca followed close after. Prior to The Shires, Crissie was performing at weddings and Ben was a former chorister at Windsor Castle, even living in the grounds of the castle when he was a child. Ben sang a solo at the beginning of the Queen’s Christmas message in 1999.