Megan McKenna is one of Britain’s biggest reality TV stars. She rose to fame in 2015 after appearing in the MTV series “Ex On The Beach” and went on to become a housemate in the 17th series of “Celebrity Big Brother”. Megan was then asked to make a cameo appearance on the 200th episode of ITVBe’s hit show “The Only Way Is Essex” and after receiving such a positive response was asked to become a full-time cast member, but Megan’s greatest talent is about to be revealed.

She can sing… Really, really well!

While viewers of CBB and TOWIE may have already witnessed Megan’s incredible vocal talents through singing segments on both shows, what they won’t be aware of is Megan’s passion for country music.

Since joining TOWIE, Megan has become one of the UK’s most recognised personalities – adored by the press and on social media too. Recognising her rising star status, ITV commissioned “There’s Something About Megan”, her first series as a leading lady, following Megan’s transition from reality star to country singer. 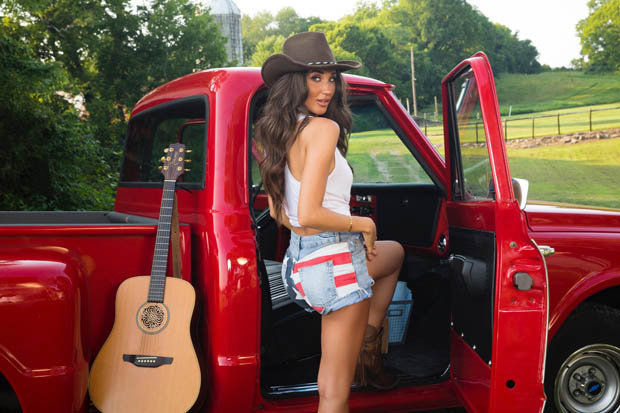 Out of her comfort zone and immersed in the Nashville music scene for a month, Megan was challenged to appear in front of writers, work with local producers, meet labels, music idols and to perform at prestigious venues such as The Bluebird Cafe, in an attempt to impress influential local tastemakers – and that’s exactly what she did.

After hearing Megan perform some of her original material for the first time in Nashville, Grammy award winning song-writer Beth Nielsen Chapman, offered to mentor Megan as a song writer, and together they created the emotional second track on this single “Far Cry From Love”. When reflecting on the song Megan said:

“This is a really heartfelt ballad which I wrote, and it means so much to me. To be able to express my feelings in a song is something I have always wanted to do. I’m sure there are so many girls and guys out there who can relate to loving a person so much, yet the only person that you think can help get you through the breakup is them but they’re the problem and so can’t be the cure! It’s really personal to me and I’m so happy with the song.”

Back in the UK, Megan teamed up with producer Nick Southwood, to finish one of the very first demo’s she recorded, “High Heeled Shoes”. The song, which was penned by Catherine McGrath, Norma Jean Martine and Nick himself, was such as perfect fit for Megan, that it was unanimously agreed that Megan should release it as her lead debut single. When asked about working with Megan Nick said:

“I’ve been a producer for 17 years and I think Megan is one of the most technically gifted singers I’ve worked with, she has a lovely tone, coupled with the ability to connect emotionally with her songs and tell a story. She is an exiting talent.”

High Heeled Shoes is an anthem of empowerment, sure to tick all the boxes with Megan’s female fans sending a body positive message to anyone who, like her, has felt pressure to be the perfect person and have a perfect image.

“When I first heard this song I really related to the lyrics and in particular about the pressure girls feel in the world today, especially from trolls on social media and from seeing perfect airbrushed images of models in magazines. It’s also about men’s attitudes to women and the way that makes us girls feel – I’m sure many people can understand that feeling.”

Check out our review of her singles here