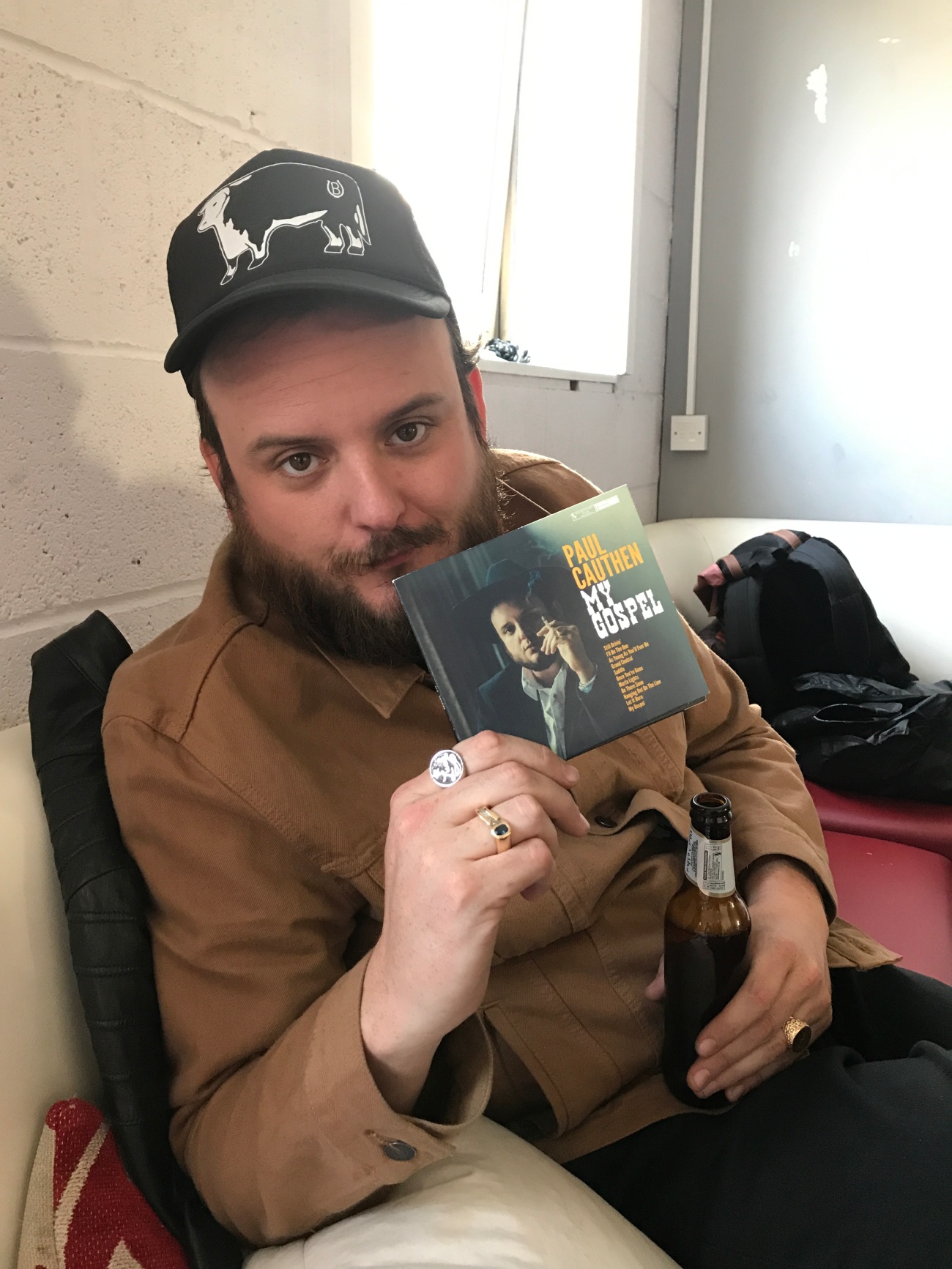 On his UK tour earlier this summer Paul Cauthen sat down for a beer with Chaz Brooks and talked freely about his musical upbringing, his influences, what’s on his playlist, his debut solo album and revealed that he sold his heart to the songs a long time ago.

Can you tell me the background to the My Gospel album?

My last band, how I started my career, was in Austin Texas with band called Sons of Fathers and we put out two albums. We toured around the States for about five years. The band broke up in April 2014. I was on my own after that and I decided I have got to put out a record that is my full potential as far as my voice [is concerned] and I didn’t want to hold anything back. That’s how My Gospel came about. These songs have been resonating in my heart for a long time, and it felt good to finally exfoliate my soul into a record.

You know, it’s a weird tricky game that we’re playing. You fight yourself on your own sound every day. You’re thinking, is this good enough? Should I do it this way? Should I do it that way? It took a couple of years for me to write. I wrote a lot of tunes. I brought about 90 something tracks into my producer and we whittled it down to these eleven that were cohesive. I’ve got a bunch of records that are ready to be dropped after this.

In the same style?

Yeah. It’s within the same style, it’s just a progression. My next album is called My Cadillac. I bought a Cadillac so I’ve now got My Gospel, My Cadillac, My Friends and My Family.

Are they about ready to go/to work on?

Not quite. My Cadillac is about ready, My Friends is almost ready, but I have to do some more for My Family.

When do you think My Cadillac will be out?

My Cadillac will probably come out first quarter 2018. That’s when I hope to be coming back to the UK with my full band. That’s my crew.

Your album My Gospel blew me away, it has a soul influence in there too.

Thank you so much man. We did a lot of it in Muscle Shoals, in the famed studios. We just kinda have that outlook. You set up a tape machine, you play it live, you cut it, get the band up to the level and you make it happen. That’s how you get that real feeling, that emotion and passion in the songs. It’s being live and honest.

Were you playing live?

Yeah. Together and then some overdubs, it was the core bass, drums, guitar, me singing – we’re doing it live.

[Paul laughs] Yeah, he said “Finish your sentences and pronounce your s’s.”

Who is your favourite artist?

Ever? Elvis and Roy Orbison, Jerry Reed, Roger Miller, Willie Nelson, Waylon Jennings. Those are my guys. And with current artists I am crazy about Aaron Lee Tasjan, Margo Price, Nikki Lane, Sturgil Simpson, The Kernal – they are amazing. Those albums are some of the best.

I’ll have to check some of these out. What’s your favourite album?

Listen to a band Cactus Blossoms – that’s a band I love – that’s like Everly brothers. It is amazing. That’s probably one on my favourite albums.

Do you have a favourite song? It’s like 20 questions this.

I have to say probably a Leonard Cohen tune. Probably Waymore’s Blues by Waylon Jennings and Patsy Cline’s I Fall To Pieces. Timeless, you know, righteous. And Willie Nelson is just a brilliant songwriter. Oh man, he’s one of the best!

How’s the tour going? Is this your first time overseas?

It’s going good. First time here, first time overseas. I loved Ireland, the people are so fine, so nice, reminds me of Texas in a way, everybody is so hospitable, just open to have a beer and hang out and get to know you. Everyone is just kinda open. It’s an amazing thing when you come across the pond and people respect you for your music and they love what you are doing. You feel the love.

It’s great. Yeah good. Someone came up to me yesterday and says “Are you Paul?” I said “yes” and he said can I take you for beer and talk about your record, and I was like “sure, yeah”. People have been amazing, man, solid. I don’t have any qualms with the people.

How to describe your music?

Honest American county roots. Not prefabricated, it’s honest. That’s what I seek out in music. I hate the bullshit on top of the national charts, that’s rap, almost hip-hop kind of country, you know flip flops and feet in the sand, tractors, drink my beer, same shit. It’s sad man but is epidemic.

So many driving tracks on the album. Then you get to the last song My Gospel which is like – wow!

Yeah, bring it down. That’s one’s basically my grandfather’s instruction to me in life, like him singing to me. He passed away when I was young – he was a singer. It’s where I get all this from. He taught me guitar and to sing. He taught me to sing in the bathtub with my two sisters, sing harmony, he would make us all cover our ears and hum a note in to our ears in harmony. Then we’d let go of our hands and we would all be in three part harmonies. Aged around 5, 7, and 13.

He taught you sing in harmony?

Yeah, I think it’s the closest thing you can ever be with another human being, other than having sex, singing harmony. It’s a beautiful thing.

Yeah, I’m pleased with it man. It’s doing its job. It’s opening the door for me. If it sells a million records or not I don’t give a shit either way. I just want it to catch people’s attention. Now that I’ve done something like this I want them to listen from now on. If Paul Cauthen releases an album they’re going to check it out – because of this record. Yes, I’d love it to sell a billion records, and have a platinum album or whatever but I feel like I’ve already made it, now that I’m touring across the countryside, touring over here in the old country and I tour all over the States. So many people don’t even get to leave their home town. They play at home, in a pub, at midnight on a Tuesday. 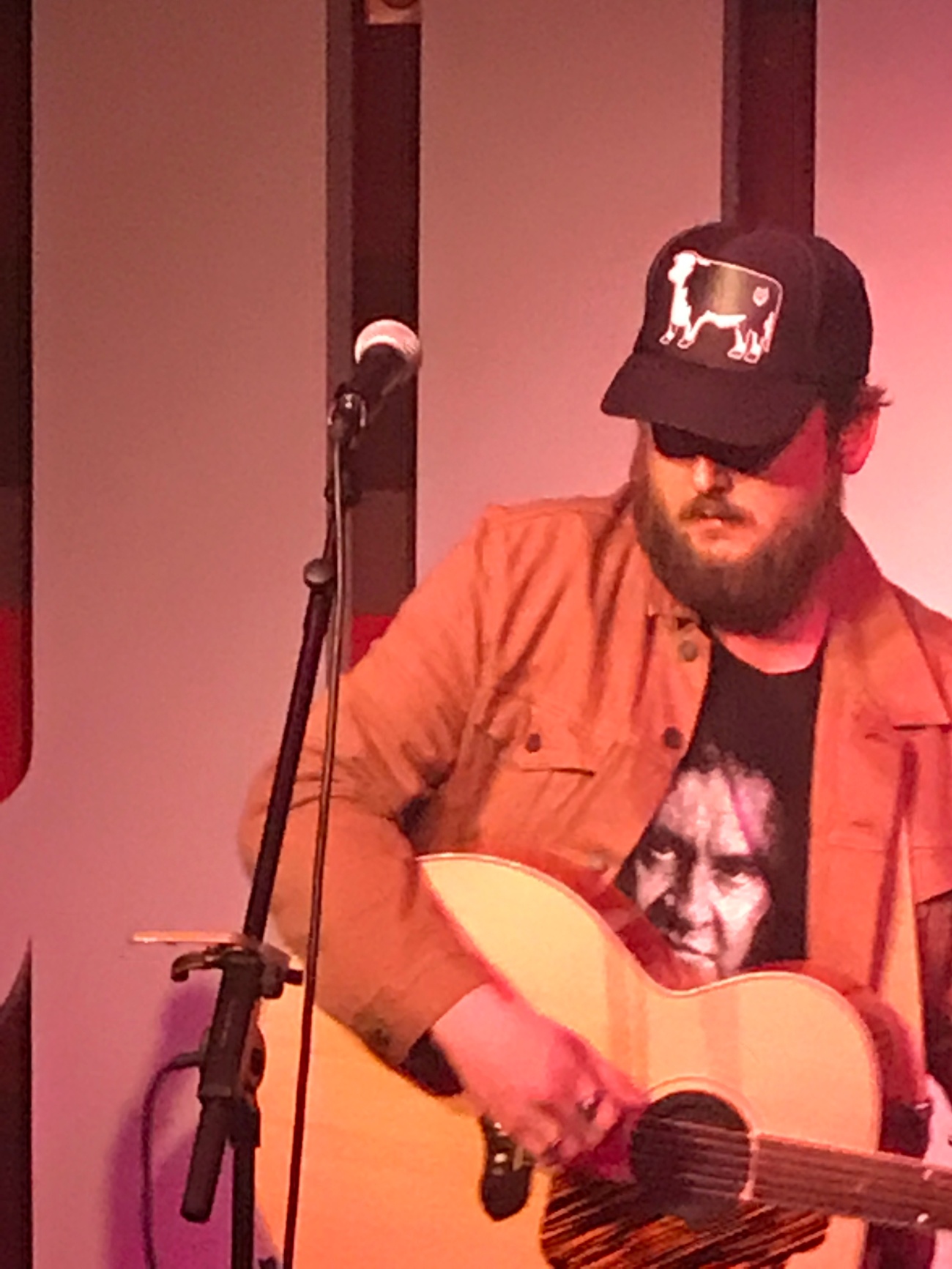 I read that you recently got married

I was going to, but we called it off about a month and a half ago. It just wasn’t the right time for us. I’m 31, I’m going to be just fine. It’s the hollow heartache that can get you down.

It already has, which should fill the void. I sold my heart to the songs a long time ago. It’s part of life man. I’ll always love her.

Tell me about your future, plans – your next three albums, your band.

Yeah, my band is called The Texas Gentlemen and we’re a collaborative fraternal order of musicians in the Dallas/Fort Worth area. There’s about twenty of us – different drummers, different players but they’re all studio worthy – very good, all hot hands, top notch, aces. “Aces in the hole” as George Strait would say. Yeah, I’ve lucked out with those guys, that’s my family you know. Those guys lift me up every day, and in the studio they lift me even more. At times I feel like I’m not even worthy of what they help me do. I bring the songs in.

Listening to [the My Gospel album] I find that hard to believe.

You’re influenced by the Church?

The Church of Christ, it’s a conservative Christian church that doesn’t allow instruments in the church, doesn’t allow organs, nothing, it’s all acapella. So it’s all heavenly highway hymns, the old hymnals. We sing Amazing Grace, Old Rugged Cross, all the old old old songs

Do you ever do any of those traditional songs?

Oh yeah man. I love a bunch of the old traditional tunes. Just as I am and Without One Plea which is one of the most beautiful songs ever. Man, there’s too many to even count. I’m lucky that I was raised in that musical environment otherwise I wouldn’t be here. Period. My voice wouldn’t be here. My ear wouldn’t be here. Harmony wouldn’t be in my life. That was my training.

I don’t go to the church anymore, but I’m a spiritual believer in God, a higher being. I believe that we are all put here and we meet each other for the right reasons and somebody else has their hand in it. I don’t know if it’s a man, woman, black, white. I don’t know. But I believe. I’ll risk, I’ll take those odds you know.

So what’s the best thing about the album?

The honesty. Every one of those songs I’ve fought for. I can say that I’m proud of that record. This record linked me in with all the right people. This record put my management around me, put my team together, my record label, everything. I brought the record to get a record deal. Me and a buddy we financed the whole thing at the beginning and then the record label paid us back for it and then gave us more money for the next album.

It’s a great album, I love it.

Why thank you man I wish the girls from Muscle Shoals sang more all over it. They sang on Be There Soon, My Gospel, Hanging Out On The Line – those three.

What instruments do you play?

Guitar, piano, banjo – but there’s no banjo on the record. I write a lot of songs on the piano.

I know that one of the songs is about a friend of yours who died.

Yeah, As Young As You’ll Ever Be. Victor Holk, an amazing icon from Texas, a writer, a poet a singer and songwriter. A lover of friends and family. I’ll never forget him.

Do you have a favourite track on the album?

My favourite tracks I’d have to say are Grand Central and Still Drivin’. Grand Central was the first song I wrote after my band broke up and the first line is “If I get to heaven I’d better roll me some sevens as right now my ticket is punched for hell …. Lord if you hear me I could surely use some help.” You know, it’s just my plea. It was me on my knees saying “God if you’re up there, guide me and allow me to do something amazing with this art. That was a gift from you.”

Music is a gift, it’s just like Beckham hitting a bending shot from half-field in a soccer game you know. I told a good friend, Will Van Bolton back in Texas this, I believe we are all bird dogs. My analogy is a bird dog doesn’t need to be told to fetch, it’s just instinct. If we’re lucky enough we find our bird dog instinct inside of us. It’s what we are just drawn to do naturally. And if each of us can find the bird dog inside of us and find our way, and capitalise, then I feel like there’s a happier place. It’s a scary lost dark place if you don’t really find what you’re good at, or what your calling is per se.

If you’re doing a job you hate you’re just dreading going tomorrow, but if you find what makes you tick I think it calls for a happy life.

Thanks for your time Paul, and for the beer.

Thank you so much. I appreciate it man.

My Gospel by Paul Cauthen
https://itun.es/gb/aQY4gb