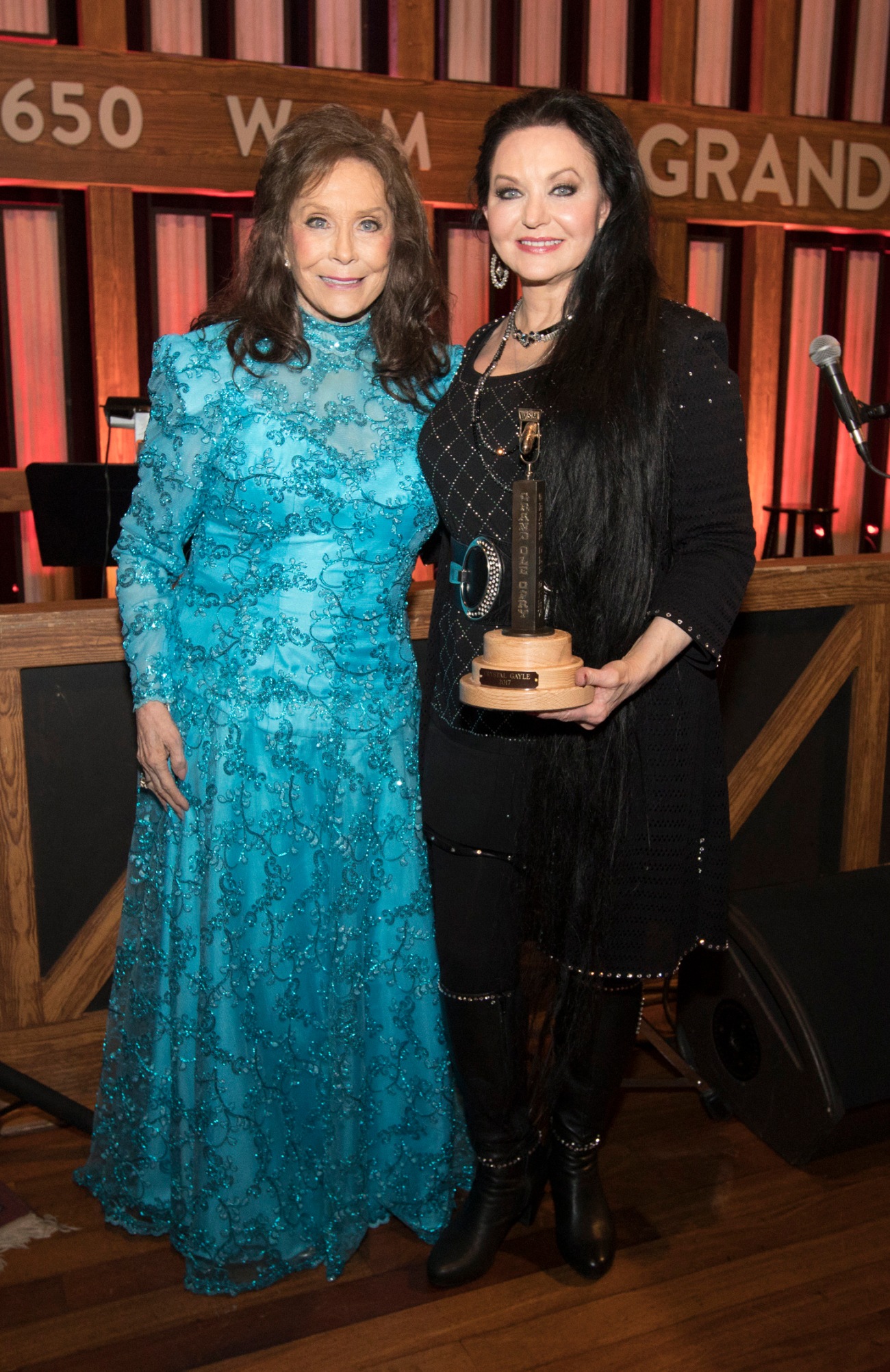 Grammy®-winning songstress Crystal Gayle was inducted into the Grand Ole Opry® last night at the Ryman Auditorium by her sister and Opry legend Loretta Lynn. Gayle made her Opry debut 50 years ago on the Ryman stage, singing the country classic “Ribbon of Darkness” at age 16. She had been publicly invited to join the Opry by Opry member Carrie Underwood in November.

“We’ve been together a long time, honey. And we’ve never had a fight,” Lynn said. “It was the greatest moment of my life when they made me a member of the Grand Ole Opry in 1962. I know she is just as happy as I was then.” “Being a member of the Opry is just incredible,” Gayle beamed. “It’s really hard to comprehend. I have felt like a part of the Opry for all these years. Now, I’m official.”

Grammy-nominated duo Dailey & Vincent is set to be formally inducted into the Opry on Saturday, March 11.

About Crystal Gayle
Crystal Gayle is an award-winning country music icon whose reign in the music business includes 20 No. 1 country hits, six albums certified Gold by the RIAA and the first female artist in country music history to reach platinum sales with her 1977 album, We Must Believe in Magic. Her her 1977 country-pop crossover hit song, “Don’t It Make My Brown Eyes Blue,” became an iconic staple and solidified her as one of the top female vocalists during the 1970s and 1980s. Her list of platinum and gold was to be matched only by her awards and accolades. CMA’s “Female Vocalist of the Year,” for two consecutive years, she became a Grammy Award Winner for “Best Female Vocal Performance,” thanks to her beloved “Brown Eyes” – a song that she today admits she has never grown tired of singing. Crystal swept the Academy of Country Music Awards for three of their “Top Female Vocalist” statuettes. She is the recipient of three “American Music Awards,” voted by the nation as America’s “Favorite Female Artist.” Perhaps nothing sums up Crystal’s career achievements as well as being awarded with a star on the fabled Hollywood Walk of Fame in October 2009. Also famous for her nearly floor-length hair, she was voted one of the 50 most beautiful people in the world by People Magazine in 1983. She is the younger sister (by 19 years) of singer Loretta Lynn, and a distant cousin of singer Patty Loveless. Gayle also has a star on the Hollywood Walk of Fame near Lynn’s star. In August 2016, the Academy of Country Music honored Crystal with the Cliffie Stone Pioneer Award during the 10th Annual ACM Honors.™ For more information, visit crystalgayle.com

About the Grand Ole Opry
The Grand Ole Opry® is presented by Humana®. Opry performances are held every Friday and Saturday of the year, with Tuesday Night Opry shows beginning on February 14. To plan an Opry visit, call (800) SEE-OPRY or visit opry.com. The Opry presents the best in country music live every week from Nashville, Tenn. Marking more than nine decades of entertainment, the Opry can be heard at opry.com and wsmonline.com, Opry and WSM mobile apps, SiriusXM Satellite Radio, and its flagship home, 650 AM-WSM. The Grand Ole Opry is owned by Ryman Hospitality Properties (NYSE: RHP). For more information, visit opry.com.
# # #