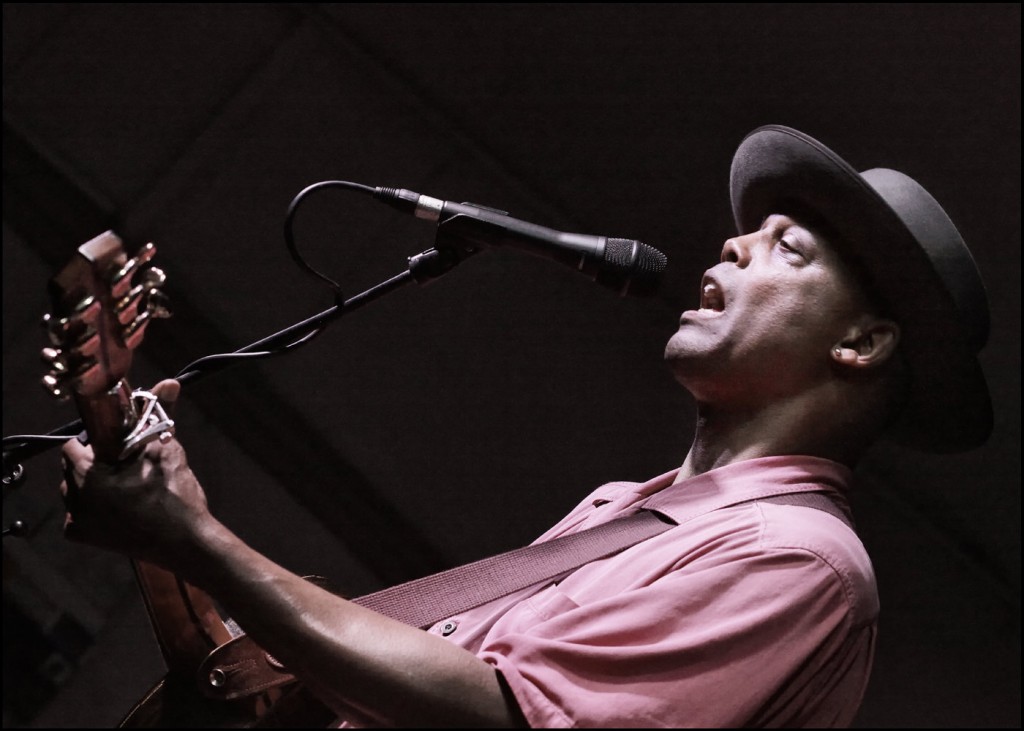 Master blues guitarist and vocalist Eric Bibb delivered a blues masterclass at Ronnie Scott’s during a week-long residency at the famous London club. He was accompanied by Staffan Astner on electric guitar, Neville ‘Level’ Malcolm on electric bass and Nina Simone’s drummer of 21 years Paul Robinson.

Bibb thrilled the joint with a variety of blues styles, all played to an exceptionally high standard.

Bibb played two sets and opened each by appearing on his own. From the first track, Goin’ Down Slow, it was clear that this was going to be a special night. Power without volume, Bibb commanded the venue and held the audience in the palm of his hand throughout. Later in the show when he raised the tempo you knew it was good as the waiting staff at Ronnie’s were dancing in the aisles.

Silver Spoon with its slow, heavy beat was “an autobiographical song”. Turner Station, a song about black workers migrating north to Baltimore to work in a steel plant, had a great groove.

When he dedicated the gentle and beautiful track Connected “to everyone here to come together to make the world a better place” he did so with sincerity and the song brought a tear to the eye of a young jazz singer sitting at the bar.

Bibb is a master storyteller and the upbeat With My Maker I Am One brought a rapturous reception from the crowd with the spiritual Needed Time closing the first set.

Bibb began his second set with a stunning solo vocal rendition of Refugee Moan from his 2017 album Migration Blues. This was a deeply personal message about migration and delivered with passion and panache. A new solo song, Along The Way, is the essence of Eric Bibb, beautiful, sincere and soulful blues.

Guitarist Astner joined him for Bring A little Water Sylvie and The Saucer And The Cup had fine improvisation and superb rhythm playing from Bibb. His wife Ulrika joined him to provide harmonies on My Lord What A Morning and then the band played On My Way To Bamako. I Wish I Was A Mole in the Ground from his latest album Global Griot provided a gentle crowd singalong to finish a truly stunning show.