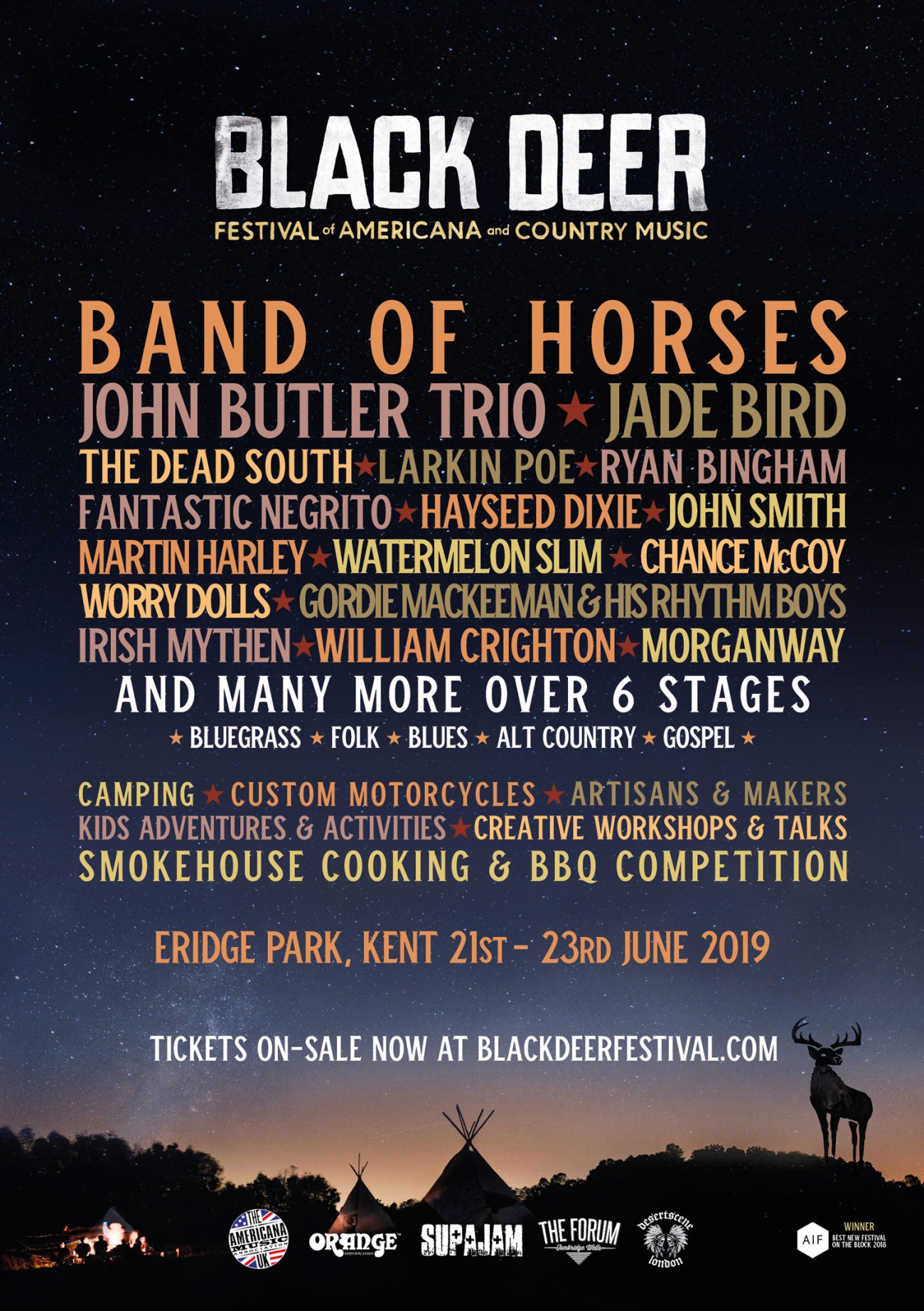 Since the first ever Black Deer Festival that took place in June this year at Eridge Deer Park in Kent, festival attendees and artists haven’t stopped talking about how amazing the Americana and Country filled three day event was and those who didn’t go couldn’t wait to go to the next one. Already the festival has won multiple awards and is looking like it is only going to get better each year.

Well, it may be a long way off yet but the first wave of line up announcements are here and are absolutely fab!

So far next year; the first headliner will be BAND OF HORSES and they will be joined by

A couple of BOON favourites in there with Jade Bird and Larkin Poe, John Butler Trio and Worry Dolls.

Band Of Horses; The South Carolina-based band have released 5 studio albums and are responsible for many of the last decade’s much-loved singles, including ‘The Funeral’, ‘Marry Song’, ‘Detlef Schrempf’ and ‘No One’s Gonna Love You’. Formed and led by the irrepressibly charismatic frontman Ben Bridwell, Band Of Horses are a rough and ready, boisterous, live proposition who garner true adoration from their legion of fans and this will be an unmissable headline slot.

Soulful with a punk edge, Northumberland’s Jade Bird has marked her out as a crossover star. With performances on Later With Jools Holland and the Tonight Show with Jimmy Fallon in the US, Jade Bird has been hotly tipped by a plethora of music titles including Rolling Stone. Her set at Black Deer is sure to be an ‘I was there’ moment for years to come.

Black Deer are also delighted to welcome Canadians The Dead South, noted for their bluegrass and hillbilly folk and distinctive dress code, and Nashville based Atlanta born sisters Larkin Poe with their riff heavy blues-rock and southern harmonies.

Ryan Bingham is the real deal – raised in a roadhouse brothel in New Mexico he was riding rodeo south of the Mexican frontier by the age of five. He has graduated to be the poster boy for American Roots music and winning an Oscar, a Grammy and a Golden Globe. Grammy winning folk musician and guitarist in the Old Crow Medicine Show, Chance McCoy will also perform.

Oakland’s very own NPR Tiny Desk Concert contest winner Fantastic Negrito will be bringing his own blend of black roots music whilst Hayseed Dixie will entertain festival fans with bluegrass covers of rock songs from the likes of AC/DC, Black Sabbath, KISS and Motorhead.

The folkier side of Americana is showcased by rising Devon star John Smith, critically-acclaimed Martin Harley takes care of the roots and blues sound along with 17-time-Blues-Music-Award-nominee Watermelon Slim, whilst fiddle playing showman Gordie Mackeeman & His Rhythm Boys will give fans a lesson on how things are done Canadian style!

Compelling duo and incredibly talented multi-instrumentalists, the sublime Worry Dolls present a beautiful set, whilst Irish Mythen’s incredible voice, underpinned by her country, roots and folk influence, will be heard throughout the weekend, along with rising star of Australian country and blues, singer-songwriter William Crighton, the raw and distinctive sounds of Bob Harris endorsed Morganway, will also perform and completes the first wave of names to be announced with many more to follow.

Black Deer celebrates a culture like no other and is more than just a music festival. It’s more than an appreciation of a musical genre. Black Deer is a celebration of a way of life. A way of life rooted in, and respectful of, the rich cultural heritage of America – a movement that’s become known as ‘Americana’.

Black Deer has been widely acclaimed as a truly authentic experience, an independent festival born from passion, and built from experience – thanks to its two female founders whose love and respect for the genre shines through every facet of the festival.

After last year’s hugely successful collaboration with the founders of Grillstock, Live Fire returns to Black Deer Festival in style with their mouth watering array of country culinary delights in tow. Bigger than before, Live Fire is set to be a soul food lovers’ heaven, as festival goers can watch the BBQ world’s best chefs, pitmasters, butchers and woodsmen work their magic, spreading the gospel of American BBQ. With a Smokehouse Cooking Cookout Competition, Food Demos, Gospel Brunch, Renowned Chefs in tow, Vegetarian & Vegan Campfires and Craft Beer, there really is something for everyone’s tastes.

The Roadhouse stage will also welcome the best custom bike builders in the world down to Eridge Park, and the mighty Desertscene will be taking the music reins with a loud dose of low and slow desert rock and heavy blues to shake up the dust. Master makers using selvedge denim, leather and other authentic materials will feature at the Black Deer Mercantile, alongside campfires, a kids and teens area that allows younger ones the chance to learn new skills, explore and engage with nature and be creative. With music lessons also on hand, Black Deer is an experience like no other.

TICKET INFORMATION
Tier 1 tickets on sale now and are available from https://blackdeerfestival.com/tickets/ 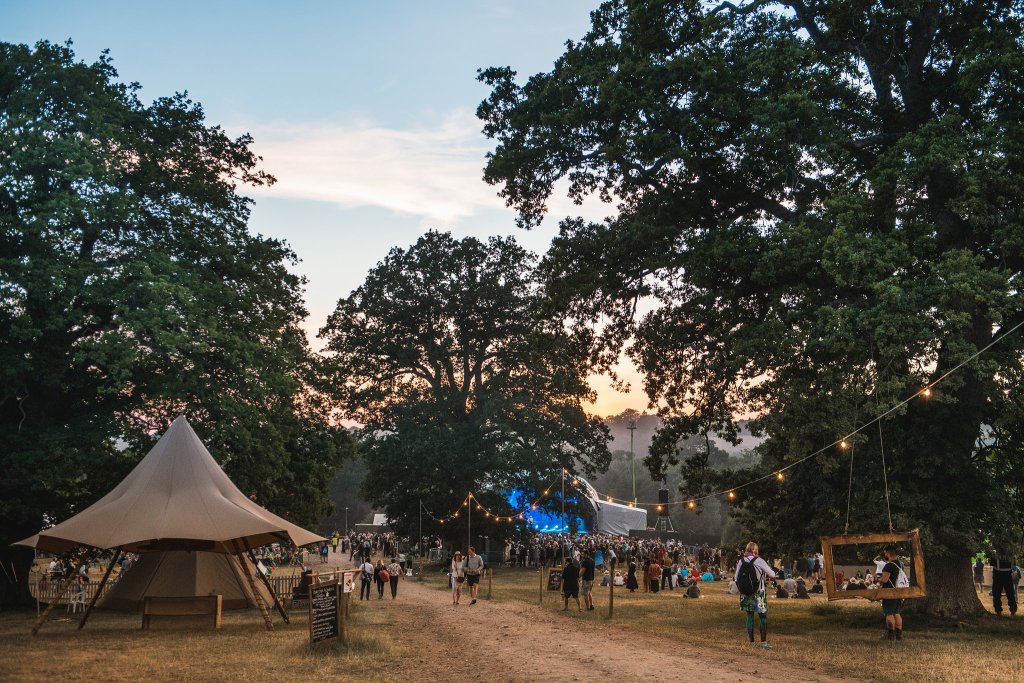