It didn’t seem like a Long Road to the Long Road Festival as we drove through country roads that took us home to where we belonged.

Arriving to a straight forward process from car park to box office to entrance to festival, no where seemed like much of a walk like you would expect at some festivals.

The attention to detail of the entire setting was on top form. The Welcome sign was a handsome feature alone but the pop up buildings were even more sublime.

We visited the Honky Tonk venue first to catch the songwriters session with Laura Oakes, Megan O’Neil and Danielle Bradbery. Packed out at 11am on a Saturday morning, we could barely see a thing but heard it all. The venue was very well decorated with vintage vinyl sleeves, road signs, lights and more and you felt as if you were in a proper honky tonk in downtown Nashville. The venue had a bar, so there was no need to keep running back and forth at two different locations. Seats and tables at the front and standing in the back, it would have been wise to arrive there early to see anyone as it got packed rather quick. My only suggestion would be to perhaps expand it next year as the festival will likely sell twice as well at the least so more people will want to squeeze in.

The set up was so intimate and getting to see artists in this setting was a wonderful experience. As well as the songwriters set we caught UK rising star Twinnie, who has really started to form a solid fan base over the years. Recently signed to BMG, Twinnie wowed the audience with her gorgeous ballads such as Lie To Me, her fun traditional country sounding Daddy Issues, up beat country pop tracks such as Cool and her usual fun on stage banter which we love.

Later in the evening we caught Loose Music artist Joana Serrat who gave a very chilled out, atmospheric and ambient set which was perfect for a Saturday evening to just wind down and enjoy good music. 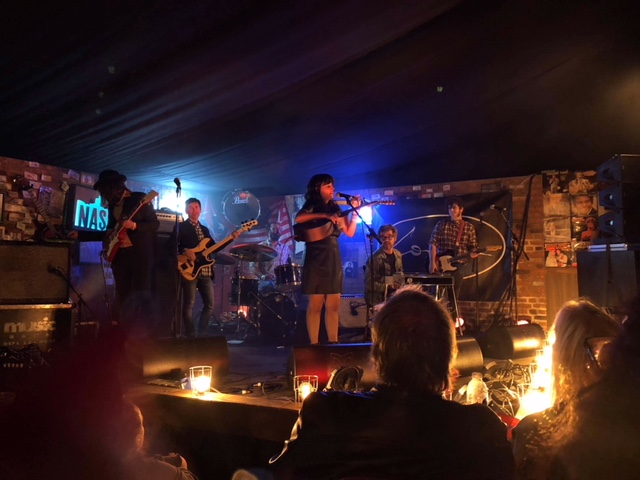 The Interstate stage which was held in a tent held a great range of artists but again, filled up quickly. Barely getting in for Brent Cobb, my suggestion again would be to have a much bigger tent next year or perhaps even another open aired stage so everyone can see. Brent, as always put on one of the best performances of the weekend. His unique southern vocals and fantastic Americana/country music is some of the best that I have heard in years. Brent is a story teller and his talking voice is so inviting that you could listen to him all day. Singing songs such as the heartbreaking King of Alabama from current album Providence Canyon and Shine On Rainy Day from album with the same title, Brent won a whole load of new fans who raved about his set all weekend. This was my first time seeing him with a full band which was a great experience.

Next up on the Interstate stage for us were The Wood Brothers who were a highlight of the weekend for us. Multi instrumentalists and authentic americana sounds, The Wood Brothers had the crowd in the palm of their hand. Playing music from across their career including tracks off new album One Drop Of Truth, the Wood Brothers were so exceptional that I hope they make the UK a regular stop.

US country pop sensation Danielle Bradbery had a large fan base in attendance for her set at The Rhinestone Stage. A stunning voice with an incredible range, Danielle’s voice soared throughout the festival apart from facing a few technical difficulties at the start. Performing some of her powerful ballads such as Potential and Worth It from her current album I Don’t Believe We’ve Met, Danielle also gave a tribute to Carrie Underwood who was meant to be headling but cancelled due to illness. The tribute included Jesus Take The Wheel and Last Name. Not many people can pull off a Carrie song but Danielle certainly can.

Stepping up to the headline spot after Carries cancellation was a favourite amongst UK fans Aaron Watson. More on the traditional side of country, Aaron proved his worth as a headliner by really knocking it out of the park and putting himself on live show par with the likes of artists such as Brad Paisley. This headline slot not only won Aaron more fans but has shown how he is an A Lister amongst Country artists and is one not to miss.

Sunday saw us mostly in Lil Possum County with our two year old. One of the best family/kids set ups I have seen at a festival, this lovely little area had Camp Site Rangers singing with the children and hosting activities as well as little play areas which included baby toys to older kids toys, puzzles, croquet, Mud Kitchens and so much more. We also went on the Big Wheel for my son’s first ever Big Wheel experience whilst watching the amazing Jarrod Dickenson play on The Front Porch Stage. Jarrod always puts on a great show and delivered an outstanding acoustic set on The Front Porch which was the perfect setting. Just before we headed to Lil Possum County we caught the end of Gary Quinn on The Front Porch stage who as my husband stated was just as good as any male artist charting in the US. Irish born Gary Quinn is a great entertainer and a wonderful singer/songwriter who always draws a big crowd and his music ranges from upbeat to gorgeous country ballads. 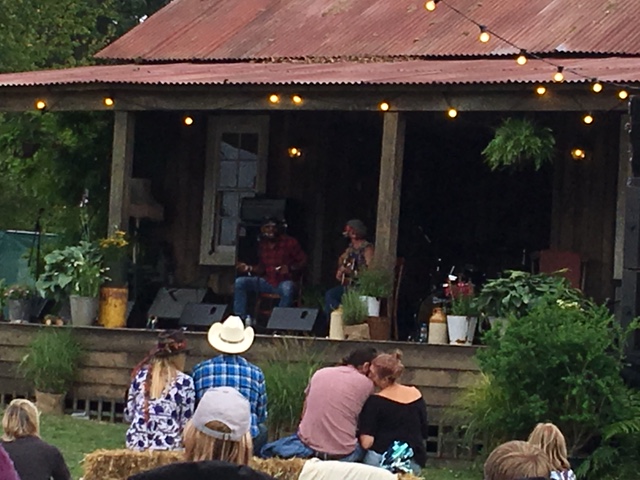 Another artist we saw on The Front Porch was Andrew Alli. The Front Porch Stage is by far the best stage and best feature of the entire festival. Built like a small wooden house with a large front porch, the attention to detail was amazing. Smoke out of the chimney, rocking chairs, curtains on the windows, moss on the roof, pretty much everything you could think of on a small southern home. Andrew Alli was new to me but I was desperate to see him especially on the Front Porch stage so that I could get some experience of what it would be like to see some Authentic Blues/Roots/Americana in that type of setting. Andrew was phenomenal and played a wicked set singing and playing the harmonica. I hope Andrew comes back next year as he is what The Long Road Festival is all about.

The Front Porch was also great as most people sat down on the floor so it was a really nice, chilled out experience.

Bristol UK based Soul/Americana powerhouse Yola Carter also graced the Interstate stage and blew her audience away. An unbelievably good singer, Yola and her band had everyone dancing, my two year old included and really showed how women in country/americana and any genre really are a force to be reckoned with. Yola is not only a gifted singer but her skills as a writer were proven with the top quality of songs she performed which included tracks off EP Orphan Offering.

The Rhinestone Stage had a great line up Sunday which included favourites to the UK Striking Matches, The Brummies (formerly John & Jacob) , Jess and The Bandits, Charlie Worsham, Una Healy and headliners The Shires.

The festival was buzzing throughout the weekend and there was a lot to do other than just music. The VIP area had a lot of feedback from fans. At around £30 a day was it worth it?? Well it only had two food stalls. Fried Chicken was one which was the only Fried Chicken place in the entire festival which upset non VIP holders who craved it. The other was a Vegan Stall who I felt very bad for as he pretty much had no customers the entire weekend and even closed up come Sunday afternoon. I felt that with such a limited customer base, he would have had a lot more advantage being in the main area, such a shame. A perk of VIP is better toilets, proper toilets in a portacabin rather than a portaloo with no lights. Apparently the women’s got blocked up pretty quick though. The bar area in VIP was quite big and under a marquee and there were seats around but not enough to cater for many. The view was a little restricted if were more to the side but it was ok, it really depends how close you want to be.

What needs to be improved at the festival for next year?

If anyone has more suggestions I will then add.

Overall though, the festival was more than a success. We had great music, nothing was too far of a walk, the atmosphere was wonderful and everyone seemed pretty much respectful of each other and the grounds. Would I go again? Darn tootin’.

We fans and artists and all knew it would be a success as we all trust Baylen or In Baylen We Trust.

Tagged as: The Long Road Festival