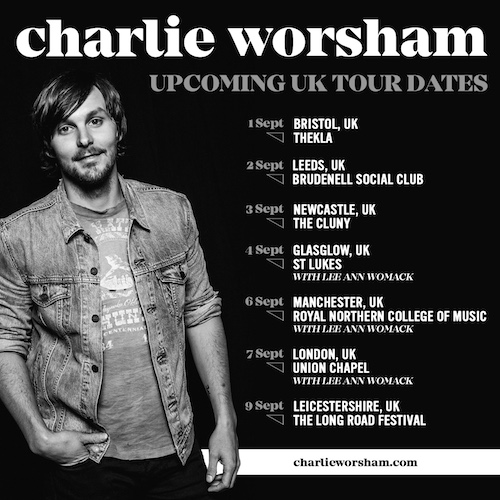 Singer-songwriter Charlie Worsham has announced a return visit to the UK in September 2018, including headline shows, a run of dates with Lee Ann Womack and an appearance at The Long Road festival alongside Carrie Underwood, Striking Matches and Catherine McGrath. This ties in with the release of his new UK/European radio single ‘Southern By The Grace Of God’, taken from critically acclaimed second album ‘Beginning Of Things’ (out now on Warner Music Nashville), which received rave reviews from NPR and American Songwriter among others, and was described by Rolling Stone as “a quietly excellent set of songs that show off both Worsham’s thoughtful storytelling and his serious musical chops” – RS Country also featured the release as one of their 40 best albums of 2017. Stream the single on Spotify / Soundcloud / Youtube. Tickets are on sale for all shows now – full dates below:

In his own words: “UK fans are my people! they were the first to hear the songs that became ‘Beginning Of Things’, and I can’t wait to be back trying out more new songs. It’s thanks to touring in the UK that I figured out how to close my acoustic shows with ‘Southern By The Grace Of God’, and singing it across the pond makes me think of my own family roots – after all, us Worshams originated near Bexhill by the sea.”

“I guarantee you these shows will influence the evolution of my music, and I’m especially excited to perform shows with a band at the Long Road Festival.”

ABOUT CHARLIE WORSHAM:
Beloved within the Nashville community, Charlie Worsham continues to receive widespread attention for his new album, ‘Beginning of Things’. NPR Music praises the way his music exhibits “deep musicality…great playing, [and] sophisticated lyricism…” with Rolling Stone naming the album to their 40 Best Country and Americana Albums of 2017 calling it “The Most Vulnerable Country Album” of the year. Variety, CMT, and PopMatters are just a few of the esteemed outlets who included his sophomore effort on year-end best of lists.

Born and raised in Mississippi, Worsham attended Grenada High School and went on to study at Boston’s prestigious Berklee College of Music. In addition to his life as a musician, Worsham is actively involved in music education and, last year, founded the Follow Your Heart Scholarship Fund in partnership with The Community Foundation of Middle Tennessee. The fund supports the youth of Grenada, Mississippi—his hometown—who possess uncommon talent and desire to achieve great things in the arts. In its first year, the organisation has raised nearly $50,000. More information can be found at http://www.FollowYourHeartArts.org and http://www.charlieworsham.com. Follow him on Facebook at facebook.com/thecharlieworsham and on Twitter @charlieworsham.