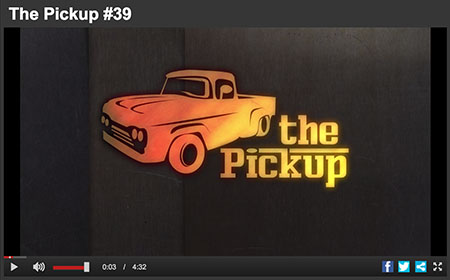 Continuing the tradition of presenting the top stories in country music, The Pickup, brings fans another fact-filled edition with exclusive content you can only see here!

The Pickup sat down with Roy Clark to discuss his Conversation with Roy Clark show which was featured at The Franklin Theatre. He tells us that his goal with this show is to “bare all” and give the fans an in-depth view into his career between performing some of his biggest hits and favorite tunes.

Billboard has announced their Greatest of All-Time Country Albums rankings. The rankings include albums from Shania Twain, Randy Travis, Kenny Rogers, Big & Rich and more. According to Billboard, the rankings are based on weekly performance on Top Country Albums (from its Jan. 11, 1964 inception through June 4, 2016). The full chart can be viewed on Billboard’s website here and listened to on Spotify.

Eric Church will kick-off the Holdin’ My Own Tour in Lincoln, Neb. on January 13, 2017. The 60 date tour will be solo, all Eric Church, no opening acts. For ticket pre-sales and more info go to EricChurch.com.

As previewed in the last episode, this episode features exclusive backstage content from Dolly Parton’s Pure & Simple Tour. The content includes Dolly meeting with fans and performing on stage amongst an interview with The Pickup about her new album “Pure and Simple” available August 19. She evens shares some thoughts on the Olympics and which event she would compete in.

The Pickup was in attendance at the ‘Stars Behind the Stars’ benefit concert at Billy Bob’s in Dallas, Texas on July 27. The event benefitted the Dallas Police Association’s Assist the Officer Foundation and featured artists like Tanya Tucker, The Oak Ridge Boys, Mark Wills, an appearance by Randy Travis and many more iconic artists.

This episode celebrates along with Mel Tillis for his birthday, previewing a video compilation of artists wishing the country singer/songwriting legend a happy birthday. Country artists like Mark Wills, Larry Gatlin, Charlie Daniels and many more came together to wish the ailing star well as he recovers from recent surgeries.

Rising country artist Kelsea Ballerini visited with The Pickup to discuss how excited she is to join the Country Cruising Cruise in January 2017. Ballerini is looking forward to partying on the Royal Caribbean Brilliance of the Seas along with fans who can purchase cabins at CountryCruising.com.

ABOUT THE PICKUP:
Launched in early 2015, The Pickup, a syndicated country video news series produced by The Hot Seat, highlights today’s stars and classic country artists making news today. New episodes are posted on the 1st and 15th of each month. The Pickup can be seen on the websites of broadcasters across the country (Nash Icon, HankFM, Midwest Communications, Zimmer Communications’ 94.3 KAT Country, etc.), online media blogs, the U.K.’s SKY Television, Heartland Network, and Sandy Zimmerman’s Las Vegas Television Network.