As most UK Country Music fans are aware, The Shires recently made UK Chart history by being the first UK Country act to make it into the top ten. Although we have all been celebrating since the announcement at C2C Festival, we were more than happy to keep the celebrations going. This, of course was a possibility when The Shires announced they were holding a Brave Album Release/Top Ten Celebration party.

To have a chance of attending you needed to pre order their album or, more recently, enter online. Thankfully, my friends and I were all successfully given a place.

The Party was held on Wednesday March 25th at Poppies Fish and Chips shop in the heart of Camden. Yes, you read that right, a Fish and Chip Shop. Obviously, all of the fans understood the reference and the reason why it was being held there right away. I am, of course, referring to the lyrics from the song Made In England.

The Taste of vinegar and salt on my lips, There‘s nothing like a Friday Night Fish and Chips.

Although I travel quite a distance, I got to London in good time to meet up with a friend before arriving half an hour early to Poppies as we were expecting a queue. However, this was not the case and, on enquiring inside as to when people were being let up, we were told to go in right away. We were horrified to find that we were the only ones there and that they we had invaded the sound check! Ha ha. After a few awkward minutes, not knowing where to stand, confused and worried looks on our faces, staff ushered us back downstairs, just to add to our embarrassment. Thankfully having already had a few drinks we found the situation amusing!

It was not too long before a queue started to form. Every one a familiar face. On our being let back upstairs, we all grabbed a table and the room started to develop an atmosphere, assisted by the complimentary Cod and Chips, which were delicious. 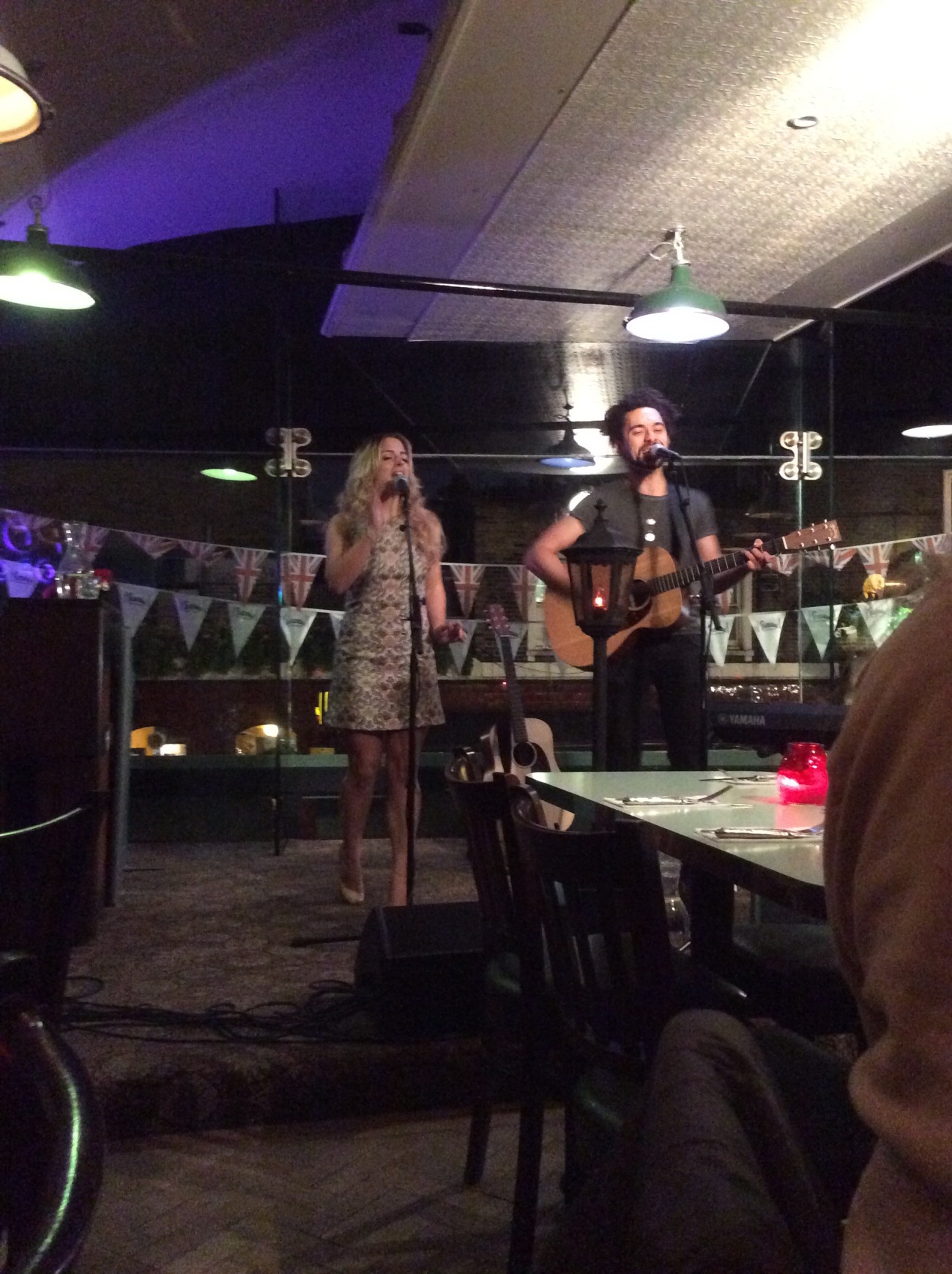 Mid mouthful, The Shires arrived and took to the stage. That is my mouthfull not theirs ha. They thanked everyone for coming and for our help in getting their album Brave in to the Top Ten and how nice it was too see so many familiar faces.  After first announcing this was like performing in front of family, Ben said “ We’re going to kick this off with Nashville Grey Skies”.

This was indeed a wonderfully intimate setting with no heads obscuring the view because everyone were sat at tables.  I only had to battle between trying to concentrate on the performance and my plate at the same time! We all managed it, of course, and also sang along, obviously when we were not eating or that would not be at all pleasant.

After Nashville Grey Skies the Set List continued with:

Made In England – Lyrics changed to Wednesday Night Fish and Chips for us. Before the song started Ben explained how they first performed this song at The Borderline in London, supporting Striking Matches and everyone laughed at the lyrics. Ben went on to say, although they were happy with the response, they never set out to be a comedy duo.

Whilst Ben was tuning his guitar , Crissie asks us, the audience, if we are enjoying our dinner and how much she loves Gherkins. She then thanks Decca, the Label on organising the party in the place of Gherkins to which Ben responds that she has a Gherkin condition.

Islands In The Stream

The whole night was just as The Shires described, it was like being with family. Ben and Crissie fail to disappoint live proving that a full band is unnecessary.  They have the ability to make you lose yourself in the performance. Their stage presence, as ever, was fantastic and they are always able to get the audience involved. I really did not want the night to end. Everyone there had such a good time and an added bonus and surprise was that Seal was in the audience. Yes, Seal, singer of Crazy, Killer and Kiss From A Rose. I heard he had just came in for Fish and Chips and was invited upstairs. It was so nice to see such a legend listening and watching The Shires. My friend noticed him closing his eyes in enjoyment, especially when they performed Young Hearts. I resisted the temptation to go up to him and say But we’re never gonna survive unless we get a little selfie, and, thankfully, I didn’t.  I may regret that!

When Ben and Crissie finished their set, they took a photo with the audience before coming off stage to chat to everyone. They told us their set lists were on napkins, and they kindly gave one to me and one to Jamie.

Being prepared as usual, we had brought with us things to sign and, our friend with the Crazy big polaroid camera, took pictures of us with The Shires. Ben then took a photo of all of us and them and referred to us as The Super Fan table. They spoke to us for what seemed ages which was incredibly nice of them, before going back on stage to take photos with other fans. I believe they knew everyone in the audience.