Michael Ray has hit some milestones this year and he added a sell out London show to the list on Tuesday night. From the moment the Florida-born singer, 31, came on stage and announced the evening’s gig was going to be like being in his ‘living room’ the […]

Every year since the first ever Bluebird Café sessions at C2C (2016) the venue has upgraded due to its immence popularity. The first year was held in a small venue where very few could attend and were lucky to see the likes of Maren Morris, Jessi Alexander, Lori […] 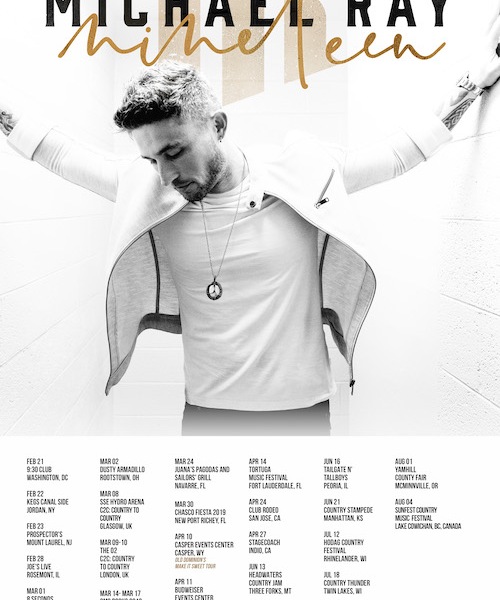 Confirmed for spotlight stage & aftershow parties at C2C London & Glasgow in March Check out the video for ‘One That Got Away’ here Much has changed for singer/songwriter Michael Ray since he was named one of Country Radio Seminar’s New Faces of Country Music in 2018. He […]

As Michael Ray’s latest single “Think a Little Less” hits No. 3 the country airplay charts and approaches the top spot, the Atlantic Records / Warner Music Nashville artist is taking time to reflect on his experiences so far. “I’m taking the time to really experience where we […]

Single hits Top 15 on country radio, continues to climb Atlantic Records / Warner Music Nashville recording artist Michael Ray will ask audiences to “Think A Little Less” when he makes his TODAY debut on January 24. As the single moves this week into the Top 15 on […]