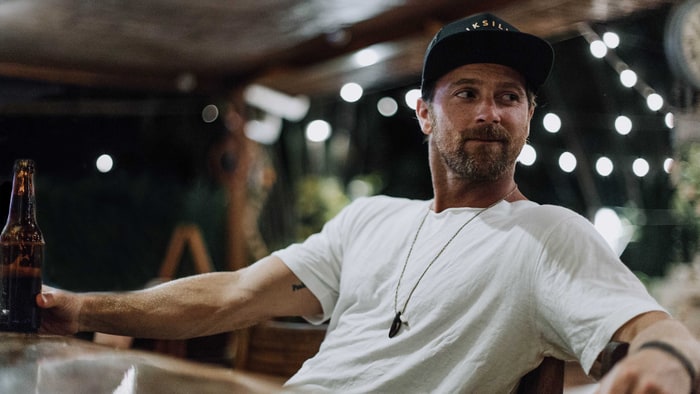 In 2015 we saw Kip Moore live for the first time in the UK at C2C Festival with an exceptional set. He returned to C2C in 2018 and we were baffled to why he wasn’t higher up on the bill after last time as his set was worthy of headlining so in no way should he have opened the night as he did.

Since then he has returned for a few headline shows in the UK starting in smaller venues to venues such as Shepherds Bush Hall. The Long Road clearly saw what we and many others saw in his shows and brought him back to headline the main (Rhinestone) stage on the Saturday of the festivals second ever year. This felt like an “at last”  moment, an “about bloody time” situation.

There is something about a Kip Moore show that is so dang exciting, electrifying and atmospheric and is always so incredibly difficult to top, so much so that whoever follows him (if he isn’t headlining) has one hell of a task ahead of them.  Kip is a natural and his voice is like no other. Bringing a rock edge to country music, Kip is one of those artists you play to non-country fans, to those who dare to say they will never like country and chances are, they WILL be a fan of his.

Kip commands your attention from the moment he is on stage and there is never a dull moment. Forget the bar, get drinks ready beforehand as you don’t want to miss a thing. Kip and his band Slow Hearts have the perfect chemistry on stage and whilst some say that Kip did not interact with the fans on stage, I disagree as the more songs he fit in the better and he certainly gave enough dialogue especially speaking of his love for the UK fanbase.

A song that I hope never leaves the set list is Wild Ones from album with same title. He often starts with this track but didn’t this time but he did play it.  Wild Ones is the perfect live song and has a stadium rock edge to it and in an open aired festival, well it is really something. A lot of his songs are like that actually and you can see that the live element of his music is always thought of when he writes as they all translate fantastically on stage. Everyone sang every word, everyone danced, everyone cheered, the festival was at full capacity and it just rocked, really really rocked and I don’t even like using that word but it did.

Other tracks played varied across his albums including Beer Money (which is always a blast and has the crowd in an impressive song along), Somethin’ ‘Bout a Truck, Plead the Fifth, Last Shot and for me, personal favourites from Wild Ones; Come and Get It, That Was Us, Heart’s Desire, Complicated, Running For You, I’m To Blame. Heart’s Desire in particular always has a great crowd interaction moment.

It is always a treat seeing Kip live and if I could go to every show of his, then I would. However, my only criticism is that he did finish six minutes early and could have easily fit in The Guitar Man or something.

If you think you have been to the best or one of the best live shows ever, think again and check out a Kip show. Kip is an artist you didn’t realise was your favourite until you saw him live.

An artist that really does make country music the most awesome genre in the world, Kip deserves to be up there with some of the biggest names. You may look at Kip and think he is just another dude singing about a truck or some beer (ok ok so two of those tracks mentioned above contain exactly that) but, he is actually so much more. A guy who plays and sings whatever the hell he wants, his melodies and lyrics are a country mile better than some of the bargain bucket stuff that is produced these days who are winning all the awards and getting all the radio play.

Get on board Festival organisers and get this guy headlining everywhere. Also Kip, I want a Live Dvd and I want one now! If ones exists that I don’t know about then someone please tell me.