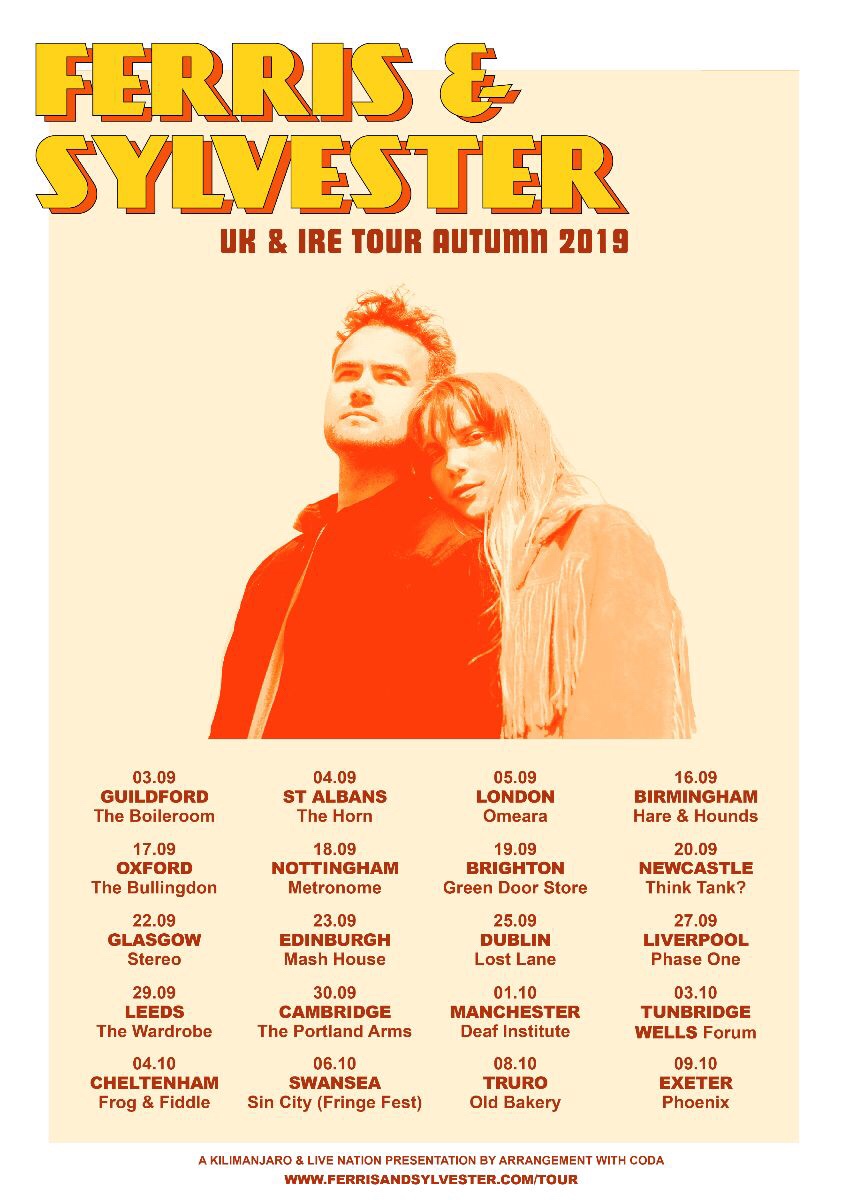 Ferris & Sylvester have announced an extensive 20-date UK and Ireland headline tour running through September and October this year. Tickets are available via O2 pre-sale tomorrow (June 5th) at 9am. A Live Nation presale starts on June 6th, before tickets are available on general sale at 9am on June 7th via Live Nation.

Regarding the tour Ferris & Sylvester say, “We’re thrilled to be announcing our second headline tour of the year. We went across the UK and Ireland in February and couldn’t believe that the dates had sold out. There’s truly no greater feeling than playing to a room filled with people singing along to our songs. We’ve written and worked on a lot of new material since then, been to the States for the first time and toured Europe. Plus this time we’re bringing the band. The venues will be bigger and we’re going to a lot more places, so it’s going to be wild!”

2019 is proving to be Ferris & Sylvester’s most important and exciting year yet. Following their sold out debut headline tour earlier in the year, they hit the road again this autumn to play over double the amount of shows, with an expanded sound and an even more impressive following behind them.

Ferris & Sylvester have also been going down a storm at festivals across the world including SXSW, The Great Escape, Live At Leeds, Eurosonic and many more.

With a busy summer ahead for the duo they have been announced to play further festivals across the UK and Europe including Glastonbury, Isle Of Wight, Boardmasters, Sziget, Belladrum and many more listed below.

The band’s recent singles ‘Flying Visit’, ‘Sickness’ and ‘Burning River’ have displayed their most raw and powerful sound yet. They have been proving a hit at radio with support across the board of Radio 1, BBC 6Music, Radio 2, Radio X and BBC Introducing – who also invited them to record a live session at Maida Vale Studios.

Ferris & Sylvester are on an unstoppable upward trajectory and winning hearts across the world with their distinctive blend of blues, folk and Americana.

“A great band, with lovely harmonies who opened for us last year. I’m sure they’ll continue to go from strength to strength in 2019.”

“From bluesy guitars that storm and shimmer to unison vocals that build to a massive group sing-along. It heads straight for the brain’s joy receptors, and damned if it doesn’t hit its target.”

“A rich and fully realised sound that leaves you pining for a full length.”

“An masterpiece of Brit Folk that should already have made them household names.”

“Rage-ridden brilliance. One of the best songs of the last five years.”

“Their contagious blend of country and rambunctious rockabilly is beautifully delivered”

“Sluicing together Americana-leanings with elements of blues, soul, and even a dash of pop, the pair seemed to tap into something primal.”

“Ferris & Sylvester’s harmonies and grounded tones seem like they were born together.”