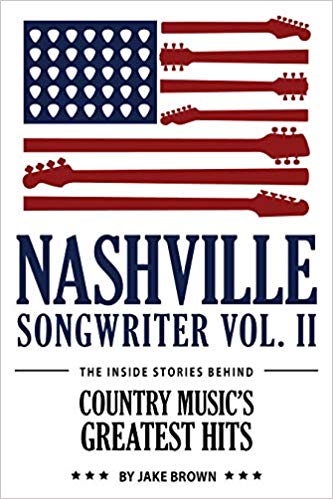 “NASHVILLE SONGWRITER II: The Inside Stories Behind Country Music’s Greatest Hits,” will hit store shelves and digital retail outlets. Featuring many of the most influential and inspiring female songwriters in country music today, the book’s spotlighted songwriters include The Love Junkies: a Nashville-based, award-winning songwriting trio comprised of HILLARY LINDSEY (“Jesus Take The Wheel,” “A Little Bit Stronger,” “This One’s For the Girls”), LORI MCKENNA (“Humble and Kind,” “People Get Old,” “Fireflies”) and LIZ ROSE (“Tim McGraw,” “Teardrops On My Guitar,” “Picture To Burn”), whose catalogue of collaborations includes the multi-GRAMMY nominated hit “Girl Crush.”

To pre-order “NASHVILLE SONGWRITER II: The Inside Stories Behind Country Music’s Greatest Hits,” click HERE. Or if in UK click below

The highly-anticipated release marks award-winning, Nashville-based music biographer Jake Brown’s 45th published book and the second in the critically-acclaimed series. Readers will enjoy the first ever totally authorized telling of the true stories that inspired 300 No. 1 hits by a collective roster of the biggest multi-platinum country superstars, including Luke Bryan, Sam Hunt, Florida Georgia Line and Blake Shelton to Carrie Underwood, Taylor Swift, Miranda Lambert, Lady Antebellum, Kacey Musgraves, Little Big Town and every major country music artist and band in between. The first of its kind book series offers songwriters the opportunity to step into the spotlight and share their back stories, struggles, stumbles and successes.

Exclusive videos of songwriters featured in the book continue to debut on several media outlets with the book’s roll-out. AXS and American Songwriter premiered footage of Lori McKenna sharing the story behind writing her Grammy award-winning songs “Humble and Kind” and “Girl Crush,” while Roughstock debuted Luke Laird’s story behind Kenny Chesney’s No. 1 “American Kids.” The Boot and The Christian Post shared videos of Chris DeStefano’s performance and story behind Luke Bryan’s 10th No. 1 hit “Kick the Dust Up” and Carrie Underwood’s Christian-crossover success “Something in the Water.” Sounds Like Nashville released an interview with Brown along with footage of Josh Osborne describing writing Kenny Chesney’s hit with P!nk, “Setting the World On Fire.”

Excerpts from some of the featured female songwriters profiled in the book:

Taylor Swift “Picture to Burn”
Liz Rose: She just came in with the melody for “Picture to Burn,” and we wrote it fast. Taylor always showed up with an idea, with an emotion, with something going on in her mind. I always say these songs were Taylor’s stories, not mine. I think Taylor writes little movies. She sees the whole story, and it comes out of her mouth, so you just follow her emotion. I pay close attention because she starts playing and starts saying words, and you just write down everything she says as fast as you can. Then I helped her put the story together, and then you put a song together. It’s an amazing process with her. There’s nothing like it.

Miranda Lambert “White Liar”
Natalie Hemby: I was saving the title “White Liar” for Miranda. We wrote at my house, and I remember it was November. I had several songs prepared for her, but “White Liar” was a struggle for me because I didn’t know if it sounded like a sad song or a “burn down the house” rager. I worked on it for several days and I still didn’t like what I was coming up with. So when I told her the title of the song, no lie, she grabs the guitar and sings the first line of the chorus: “Heeeeeeyyyy, White Liaaar. Truth comes out a little at a time.” I just looked at her and said, “Well, yeah. Like that.” It came so easy for her; it almost pissed me off. It ended up being the first No. 1 for both Miranda and I.

RaeLynn “God Made Girls”
Nicolle Galyon: I had seen a commercial, like a “God made a farmer” commercial for a truck company, and I’d written down the concept of that commercial, like “This happens, and this happens, so God made a farmer,” and when I threw it out to the room. I said “I have no idea what this is, and we’re not going to write a farmer song, but I’m just going to tell you,” because sometimes the heart behind something can turn into the heart behind something else, and that’s sometimes where ideas come from. Whatever it was that made me feel something when I watched that commercial is why I put it in my phone; not because I wanted to write a song about a farmer. And this song is a perfect example of that because we didn’t. But just the conversation of “What else could that apply to? We needed this in the world, so God made…” So, I think that’s how we got to the idea of it. We wrote that song at Liz Rose’s house in the afternoon, and I don’t even really know how the four of us got in a room together because usually we do a 3-way, and if there’s a 4-way, there’s usually a track person or producer in the room. So it was pretty heavy handed in that it was mainly a lyrical idea in the room with all the players that were involved. It really wrote itself pretty fast.

Carrie Underwood “Jesus Take the Wheel”
Hillary Lindsey: It’s weird when you write songs like that, that song in particular too, and there’s a handful of them where you don’t really know how they were written when it’s over. It’s like “Wait a minute, did we do that?” because it seems so powerful, and I really think it’s God. I think we’re just vessels – all of us are, whether we write music or we don’t. I think that, to me, is what’s so crazy about that song is that it truly helped people. There was something on CNN with two girls who got kidnapped and sang the lyrics to that song back and forth to each other during the ordeal. It was just unbelievable.

Tim McGraw “Humble and Kind”
Lori McKenna: I’d just gotten all my kids off to school, and I was sitting in my house thinking about the things that we want to tell our kids, and at the time, my youngest was 10 and my oldest was 25, and we have all these different ages going on and the things my husband and I try to tell them and want to tell them, and decided to make a list. It took me the day to write it, and I went and picked them up from school, cooked dinner and all that stuff, and when my husband came home, I was still tweaking it and finishing it up and played it for him, and he said “’Man, that’s good!” So I sang it in my phone and emailed it to McGraw, and I still see that song as such a simple, little prayer. I always call it: “This is what I want you to know, this is what I want you to believe in yourself, and I want you to be a good person,” and Tim thought in such a bigger way. That was another blessing, because “Humble and Kind” is another example of someone in the universe being really nice to me (laughs) and letting me write that song and be in a position where I could forward it to someone like Tim and for him to see it in such a huge way and make such a beautiful moment of it. It’s all been so magic.