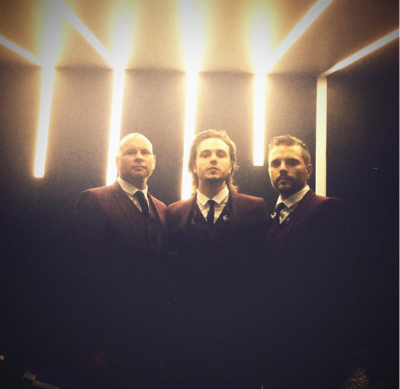 Tickets on sale now at: http://po.st/enationLDN

Comprising Jonathan Jackson, his brother Richard and Jonathan Thatcher, formerly of UK band Delirious, rock trio ENATION deliver a sound inspired by alternative, post-punk and early new wave, with bands like Echo & The Bunnymen, Talk Talk and Simple Minds at the core of their influences, alongside the likes of Muse and Radiohead, who they covered on their Top 10 Billboard charting DVD and album Live From Nashville in 2016. With an ever-growing US profile, Billboard hails them as, “A rock band on the rise!”

And now, fresh from his appearance at London’s O2 Arena this weekend as part of the nationwide NASHVILLE TV show cast tour, Jonathan Jackson (aka Avery Barkley on the show) returns to the UK with ENATION for their highly anticipated debut headline show at London’s Omeara on May 19th.

Their 2017 full length album Anthems For The Apocalypse, was a powerful delivery of the band’s songwriting and performance capabilities, capturing an emotive and anthemic experience from start to finish. It features the forthcoming single, ‘A Shock To The System’.

With a shared passion for music, art and life fueling the core of the band, ENATION are a sonic force that will ignite rock fans from Nashville to London and far beyond!

TICKETS ON SALE NOW AT http://po.st/enationLDN