Imelda May – Live at the Anvil, Basingstoke

Imelda May doesn’t play it safe. Her new album Life Love Flesh Blood is moving her in a more soul and blues direction, away from the rockabilly style which made her name.

She began with the new single Call Me, backed by acoustic guitar with the rest of her band of five joining in instalments. She sang sitting on a chair and threw in a verse in French for good measure.

Introducing When It’s My Time she noted “I wrote this in my dressing gown and slippers” and after Human she asked “Could I get a glass of wine please?” 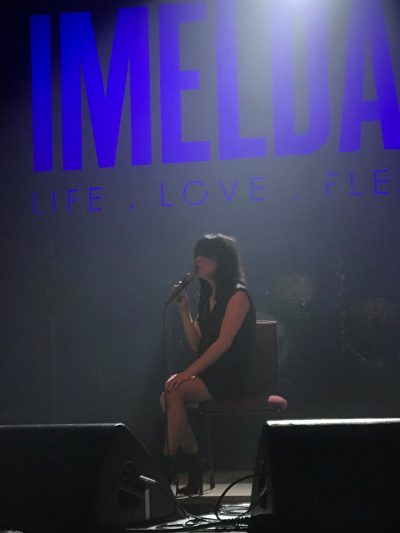 Sixth Sense could have its roots in fellow Irish songstress Mary Coughlan’s Seduced. May explained “It’s about when you meet someone and you think you’ve met them before. You know it’s not going to go so well, but you go for it anyway!”

Dressed in a little black number May had stage presence, confidence and charisma to spare. By this time her glass of red wine had arrived and she was well into her stride. “It makes me sound better in my own mind” she quipped dryly.

Big Bad Handsome Man returned to previous material and then more of the new, with Bad Habits “which make life way more interesting” and Black Tears, perhaps the standout track of the night, a slow ballad with a country feel and brilliant vocals.

At this point May’s catholic upbringing came to the fore, asking members of the audience to introduce themselves to the people sitting near them. I introduced myself to the chap next to me, Ian.

Inside Out from the Love Tattoo album was reminiscent of Fairground Attraction and showed May’s lighter side.

She then temporarily dispensed with four of the band, retaining her acoustic guitarist who sat with her on the front of the stage for a rendition of the song about another Dublin girl, Molly Malone, and The Girl I Used To Be off the new record which was beautifully performed.

The band returned with Leave Me Lonely and Should’ve Been You which is a perfect pop song.

Mayhem ensued with May back to her rockabilly roots and the audience on their feet. “Do not sit down. I dare you” joked May, but with such conviction that Ian next to me immediately stood right back up again.

More crowd favourites drew the show to a close, including Johnny Got A Boom Boom with May demonstrating her expertise on the bodhrán.

By the time of the encore Ian had taken his sweater off, May was in overdrive and the pace was frenetic. Her final track morphed into a rocky version of the Irish punk classic Teenage Kicks.

May is a superb performer, with strong material and a mix of styles from soul to gospel to blues and of course with rockabilly roots.