On one of the hottest days of the year, for the UK, it was not doubt going to get even more heated up in Bristol as Kiefer Sutherland and his band were playing The Bierkeller. To say that I was excited was an understatement. Kiefer’s debut solo album Down In A Hole was one of my favourite albums of 2016. Check out our review for Down In A Hole here. For many, it is difficult to believe someone who is known more for working in another field, in Kiefer’s case acting to be able to cross over to another field such as music but you see, Kiefer has always been a musician, it’s just that now happens to be the time he chose to truly pursue it. 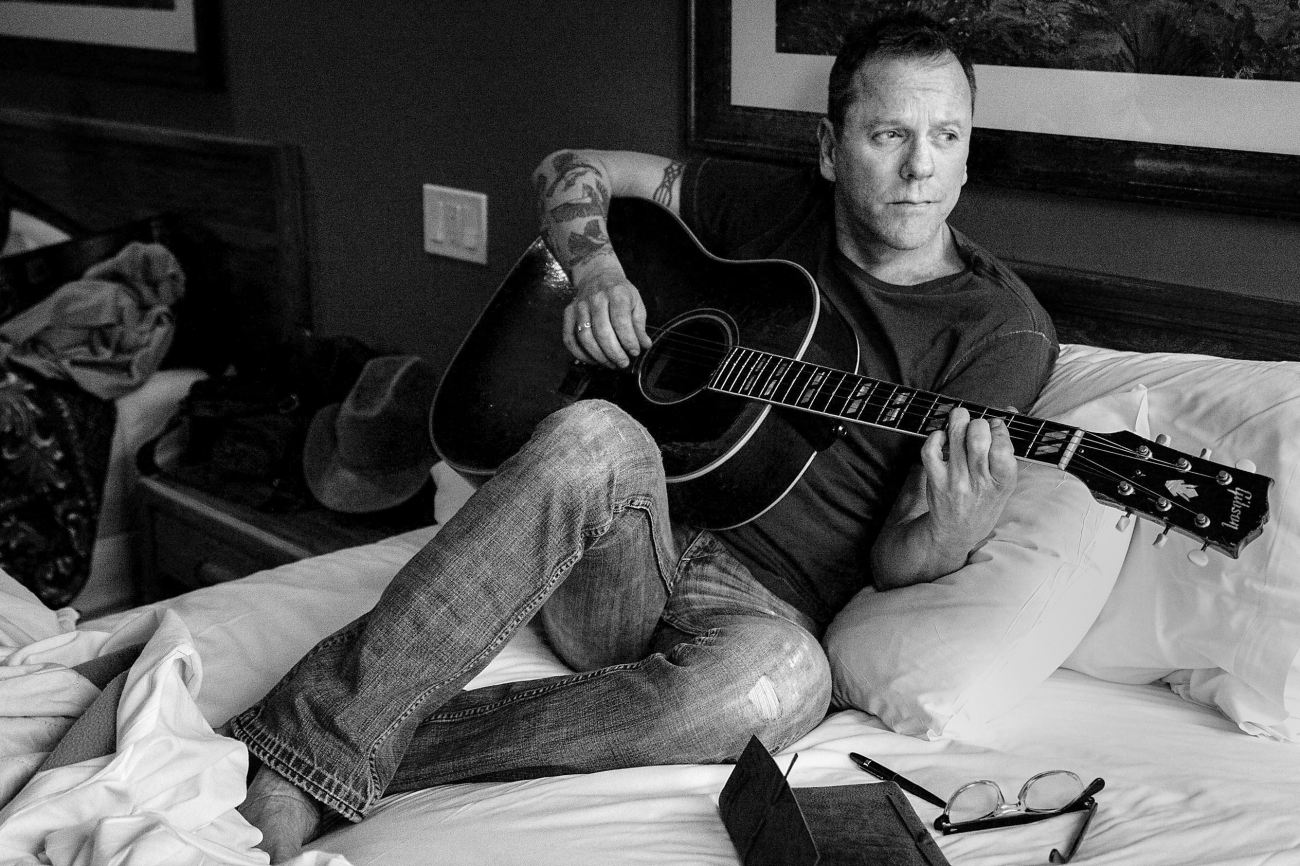 Having been to the Bierkeller on numerous occasions, I had never seen anything quite like last night. People do tend to queue early, that’s not exactly new but on this evening, it seemed that everyone had turned up early, everyone wanted to be on time, the queues ran both sides of the entrance right around the corners. It was nice to see a different audience to what I am used to. The audience ranged from hardcore country music fans to fans of Kiefers music alone. Thankfully, not many appeared to be in ‘24’ t – shirts or other films/shows it seemed, and rightly so – it showed that everyone was there for Kiefer the musician not Kiefer the actor. Please do not mistake this in my knocking those who were, I simply meant it was good that not everyone was.

The audience was mostly mature, that too was a nice change, everyone was enjoying themselves no end before the show had even started and the atmosphere, despite the unbearable heat was pumping.

Although the night was sold out, The Bierkeller had plenty of space to stand and they also had various picnic tables to the sides which many people were standing on – health and safety risk? For sure but hey, we all wanted to see Kiefer so it was worth the risk.

The lights dimmed as an intro played to gear up an already excited crowd at 8.55pm. Promptly at 9pm, Kiefer’s band casually walked on stage followed by a very cool and calm Kiefer dressed smartly and wearing a hat, not cowboy but like the one the main character in Due South wears. Kiefer then raises his glass to the audience before breaking into Can’t Stay Away. This song is one of my favourites from Down In A Hole and it went down well. The crowd started to get bigger and more energetic as more excitable fans started to emerge and scatter across the venue.

After the first track or two Kiefer greeted the audience, he was so very thankful for everyone being there. At one point in the evening he even said something along the lines of “Thanks for coming out to hear 13 or 14 songs you have never heard before” well Kiefer, we know them, we have known them for a while so don’t worry there and I know myself and a few others, especially those at the front knew the words to almost every song.

Truth In Your Eyes was up next which is such a great sing a long song and translated really well in a live setting. Kiefer’s band were absolutely electric, they were on fire all night and they all seemed genuinely happy to be there. Kiefer, a talented musician himself showcased some very impressive guitar work throughout the evening proving that this career move wasn’t just an overnight thought but a lifetime dream and it was wonderful and a proud moment to see him living it. I’ll Do Anything from the album which is another favourite of mine followed, this song has a positive melody which is very sweet – sounding with an infectious beat. It is such a good song and I loved the live version. Singing along made me really happy and quite emotional to be honest.

Kiefer then performed his debut single Not Enough Whiskey which is more of a country-rock ballad. This was a great moment as was the song that most people knew for sure. I love this song, it shows such a vulnerable side to Kiefer and is very emotive. Kiefer’s performance of this song did not disappoint as he showed not just emotion but honesty. If you have listened to Down In A Hole you will know that it is a very honest, truth-telling and compelling album full of story telling tracks that are full of heartache, regret, optimism and life experiences.

Kiefer at one point also stated how he never imagined that when he was writing these songs with his friend Jude Cole that it would lead to a world tour, I am so very glad that it did.

What was interesting was the amount of stories Kiefer told throughout the evening giving us a slight insight to his life and the meaning behind his songwriting. He tells us of a time he was in a bar all night and that it got to 4am and he wondered what the hell he was still doing there. This song, inspired the track Going Home which he performed next. This song is sonically great live, the instrumentation is really funky and upbeat and it is a very rough, hard-hitted and edgy song vocally too, probably one of the best songs off of Down In A Hole.

Expressing his love for country music, Kiefer tells us his inspirations draw from Johnny Cash and Merle Haggard. He explains how much the honesty in their music helped him through many hard times, he goes on to tell us how Johnny sang a lot about prison and whilst he (Kiefer) had never been to prison, he had been to jail two or three times. His next song Shirey Jean was from the perspective of a prisoner the night before his execution. This country-folk song holds a lot of elements of traditional country on it with its style of story telling verses and is another track that is one of the best off the album.

Things got a little more outlaw country with a little more of a dark, spaghetti western style in a way with All She Wrote. This has such a strong, dark melody and is a Country-Blues song with a bit of grunge rock thrown into the mix. With aggrieved, passionate vocals, Kiefer proves the power and effect behind truth-telling lyrics ‘Let me tell you a story from the marrow of my bones, let me tell you a story that will teach you how to roam’.

The night got rockier with the song Down In Hole which has an anger element to it with really raw, gravelling vocals from Kiefer that live, showed more of an honest side to the song. As I described in my album review – An edgy country–rock song with disgruntled vocals and cutting lyrics that speak of self anger.

‘I’m talking to you, yeah you in the mirror. The stain on your shirt is from yesterday’s dinner. Couldn’t keep it down, sure look like a winner. Get on your knees and pray like a sinner, you’re down, down in a hole’

The band to got to showcase their talents in the instrumental segment of this songs performance which was outstanding. Kiefer has gathered some truly masterful musicians, creating a more than exceptional band who played the hell out of their instruments and got the crowd to an energetic force throughout the evening.

Kiefer also treated us with new songs such as Saskatchewan and Rebel Wind which should be on the second album. He also performed a song called Goodbye which he explained never mad the album which was a shame as was a great song.

A well as mostly original material, Kiefer delivered covers of Ways to Be Wicked by Lone Justice , The Bottle Let Me Down by Merle Haggard, Honey Bee by Tom Petty, Sundown by Gordon Lightfoot and Knockin’ on Heavens Door by Bob Dylan.

Merle Haggards Bottle Let Me Down came with an interesting story of when Kiefer met Merle just weeks before his death and how he offered him a guitar to which Kiefer politely declined. This was a great cover and a wonderful tribute and he raised his glass to Merle at the end, thanking him for his music.

As a Canadian (although London born), Kiefer tells us how there is one artist that you would get your butt kicked if you didn’t like them. “ It’s a good thing I happened to love this artist” says Kiefer to which he then plays a fantastic version of Sundown by Gordon Lightfoot. 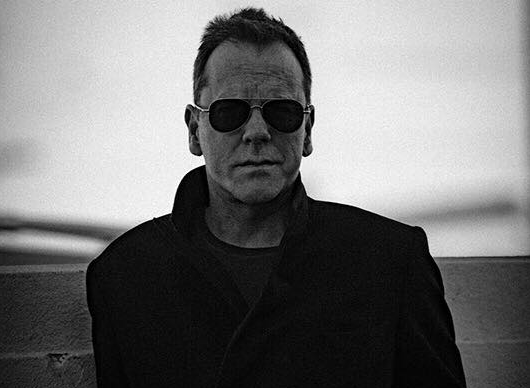 Calling Out Your Name was a stand out performance for me and was the first song of the encore. Kiefer sang with such passion and emotion that I think everyone thought he was going to break into tears. You really felt and believed every word that he sang in this song and it was a moment where the crowd fell silent and listened with absolute respect. This is such a beautifully haunting song which is from such a painful place and it makes you feel sad to hear him sing such words.

It was fascinating to hear a bit about his childhood. Kiefer tells us of a time when he and his sister Rachel were left to live with their dad whilst their mum was sorting out a new home for them. He explained how there were no rules with his dad and that he had some great memories. He says how his dad would paint his own butt black rather than fix the hole in the trousers and how he scared the other children when he would drive them to school in his red Ferrari. He further tells us of how his dad would play this one song on repeat and he then gives us a rockin’ cover of Bob Dylan’s Knockin’ On Heavens Door.

The night ended with a new song and previously mentioned Rebel Wind which was written on the US leg of the tour with band mate Austin.

To sum it all up it was an overall steller performance of some of the most honest music I have heard in along time. Kiefer really showcased his talents as a musician and filtered out any doubt people may have had that an actor can too be a great artist. The entire band gave the songs off Down In A Hole a true credit and I have no doubt that many will be purchasing the album after the show if had not already.

For me, and many I am sure, it was a night full of real music, no gimmicks, no falseness just great music from a great band and a wonderful singer/songwriter. Kiefer deserves high praise and to be seen and heard as just as good as any country artist that is out there today. With his music leaning to a more traditional side, I would say he was even better than most.

I thoroughly enjoyed myself, one of the best evenings of music I have had in a long time and I left feeling really fullfilled and on a high. I would go see him again and again.

He is off to Glastonbury this weekend, wish I could be there.

Get your copy of Down In A Hole now

Down in a Hole by Kiefer Sutherland
https://itun.es/gb/imGeeb