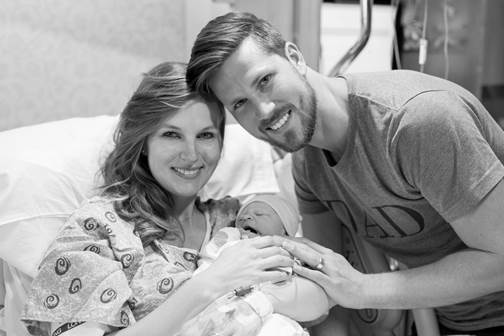 Curtis Rempel, one-half of Atlantic Records/Warner Music Nashville act HIGH VALLEY, is living the lyrics of the duo’s new single “She’s With Me” as he and wife Myranda welcomed a new member to the family over the weekend. Baby girl Millie June arrived Friday, April 7, joining big brother Ben (3) as revealed on High Valley’s Instagram account today. The family will enjoy a few quiet days at home before High Valley return to the road for headlining and festival shows.

While HIGH VALLEY’s Brad and Curtis may have been raised in the close-knit, remote community of La Crete, Alberta — more than 2,500 miles from where they now live in Music City — the brothers’ music reflects bluegrass roots with a modern pulse. Over years of relentless touring, High Valley has developed a devoted fan base that has devoured more than 43 million song streams, including 22 million for their high-energy hit “Make You Mine,” songs included in EA Sports Madden NFL 17 soundtrack and ESPN’s NCAA coverage plus countless European and North American concert tickets. Having performed on NBC’s Today Show and been named “Artist To Watch” by Rolling Stone Country, Taste of Country, CMT, Spotify, Pandora and “Country Song of the Summer” by Billboard for “Make You Mine,” High Valley is poised to breakout with their recently released major label debut album – Dear Life – on Atlantic Records/Warner Music Nashville.