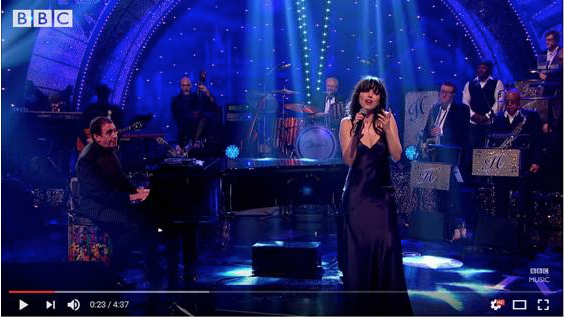 “Ms. May has a rich, tangy voice and sultry presence”—The New York Times

“[May] performs with undeniable flair.”—Associated Press

Imelda May stole the show on Jools Holland’s esteemed annual Hootenanny this year, performing a knock out rendition of brand new track ‘Black Tears‘, from her new forthcoming album ‘Life Love Flesh Blood’ due for release in March 2017. Since it’s YouTube upload, the performance has had over a hundred thousand views a only a few days and is the second most viewed video on the BBC Music YouTube Channel since October. Imelda was joined on stage at the Hootenanny by Jools Holland who took to the piano to perform the track. Imelda’s career began with early support from Jools Holland and the Later TV series. Touring initially as a support act for Jools after she caught his attention with early album Love Tattoo, Imelda then made her first appearance on Later in 2008.

Jools also performs on her forthcoming album alongside contributions from guitar hero Jeff Beck, as well as an accomplished group of backing musicians including the core trio of guitarist Marc Ribot (Tom Waits, Elvis Costello), drummer Jay Bellerose (Robert Plant and Alison Krauss) and bassist Zach Dawes (The Last Shadow Puppets, Mini Mansions). Recorded over seven days in Los Angeles, the songs on the forthcoming record were written over the course of May’s tumultuous past year. May states that she began writing songs for the album with “no preconceived notions of where it was going to go. My plan was to have no plan because it was freedom. It was liberating.”

Produced by the legendary T Bone Burnett, the forthcoming release marks a new direction for May. Burnett noted, “I’ve never met anyone quite like Imelda May. She is full of life. When I first happened onto her music, she was a punky Irish Rockabilly singer with a great band. I was intrigued by her deep feeling for and understanding of that American art form, much of which, of course, had originated in Ireland. When I ran across her several years later, she had gone through a change of lives and was writing about it with a wild intensity and singing about it in the most open hearted way. I was inspired by her honesty and her generosity, and I continue to be intrigued.” May adds, “It’s therapy, like keeping a diary that a lot of people read. Some of my favourite songs don’t say much, but they reveal everything.”

May’s previous records have seen success both in the U.S. as well as in Europe. European success includes Tribal’s debut at #1 in Ireland and #3 in the UK, as well as 2010 studio album Mayhem, which went Platinum in Ireland and Gold in the UK. The Guardian gave Tribal four stars, saying “This album is no time capsule; it’s fresh and embracing…” while The Times praised May’s “raw, impassioned vocals.” Critical acclaim in the USA came from high profile TV appearances on shows including Conan and “The Tonight Show with Jay Leno” alongside esteemed publications including The Los Angeles Times commenting, “Ireland-born Imelda May’s career is fostered by paying homage to legends like Buddy Holly and Johnny Cash and, more importantly, furthering rockabilly’s cross-pollination into New Orleans jazz, delta blues and amp-splitting punk aggression.”