About Fopping time – A Shires First Ever Album Signing Story

Well, where do I start? When The Shires announced they were doing CD signings via Twitter, I thought to myself, amazing but….I can’t go. I live hours away, need to book time off work and it will only be an hour tops. But something in the back of my mind was just screaming GOOOOOOOOOOOOOOO and how can I ignore that? I mean it was like having both the mini Devil and Angel on each shoulder yelling at you but this time they were in agreement so what could I do?

I think being a witness to The Shires’ progression over the past year, it would have been criminal not to go. I also wanted to get photos for the Twitter page, an autograph to hold a competition for and, more importantly, I wanted to be there for their very first Album signing EVER.  I think I would have regretted it if I didn’t go. Plus, my coach was only £13 so it was all looking positive.

I already planned to meet up with my good friend Jamie and we were going together. The week before, I had written a poem and created a card via Moon Pig as a congratulations to Ben and Crissie. When it arrived it was three times bigger than I expected, I was so embarrassed. When I showed Jamie I almost ALMOSTdecided against giving it as thought it was a little geeky and silly. But…in the end, I thought, who cares right? I am a geek and, damn it, I’m a proud one.

So off to Fopp we went. That sounds wrong doesn’t it? So when we arrived we were third in line, which was good as I hate being first. We could hear The Shires sound checking downstairs and I made a joke that this was the performance and that we get to hear it from upstairs, hand our CDs through the gap in the stairs for them to sign and that will be it, and it was. KIDDING.

When it was time to go downstairs there was a lovely little stage set up, or area really as it wasn’t on a platform – so is that still a stage? There were a few professional photographers and a very good turn  out, fan wise.

When they came in they were very sweet and normal and looked really happy to see everyone and mentioned how they pretty much knew everyone on the front row. Does that make us cool or stalkers? Ha!

They started with Nashville Grey Skies and everyone sang along. I mimed, I always mime. Mostly because no one’s come to hear me sing have they? It is a tad annoying when the artist you have come to see live gets drowned out by the person next to you properly going for it, just to hear their own voice – but at the same time, I love listening to everyone sing their songs back to them.

Next up was Friday Night. Everyone sang along to that and the energy was electric. Ben then took to the keyboards and they did ‘I Just Wanna Love You’ which they haven’t performed in a while, so I was really pleased. After that Ben asked the audience if we had any requests but, before he even finished, someone shouted STATE LINES and Ben was very happy with that, so they played that next.

Before the last song, Ben and Crissie got a bit emotional about how they always dreamed of being here but never believed it would happen. They informed us their album Brave had taken the number 8 spot on the midweek main album chart which was just so wonderful to hear. They thanked all the fans and said how some of us had been on the journey with them since the beginning and that it was lovely to see new fans too.

They then ended with the song TONIGHT. The crowd split in two for the vocal parts as they usually, do but this time it was more intimate and such a great vibe. It was like being in a room with friends, all singing together.

What a great performance. I don’t think it’s possible for The Shires to give a bad performance. Their voices are flawless, they have a great stage presence and interact with the crowd. The songs sound so good live, as always, and you are left wanting more – but are equally satisfied as it’s always such a good show. There is no arrogance on stage and it’s like being with friends. How can such talented people be so nice and down to earth?

It was nice to be in such an intimate setting too, I loved every minute of it.

After the set, Ben and Crissie sat at a table to meet everyone and sign items. We were halfway down the queue as I did not want to be first and I wanted to take photos. It was really nice to see other fans go up and say hello and be overwhelmed and excited. 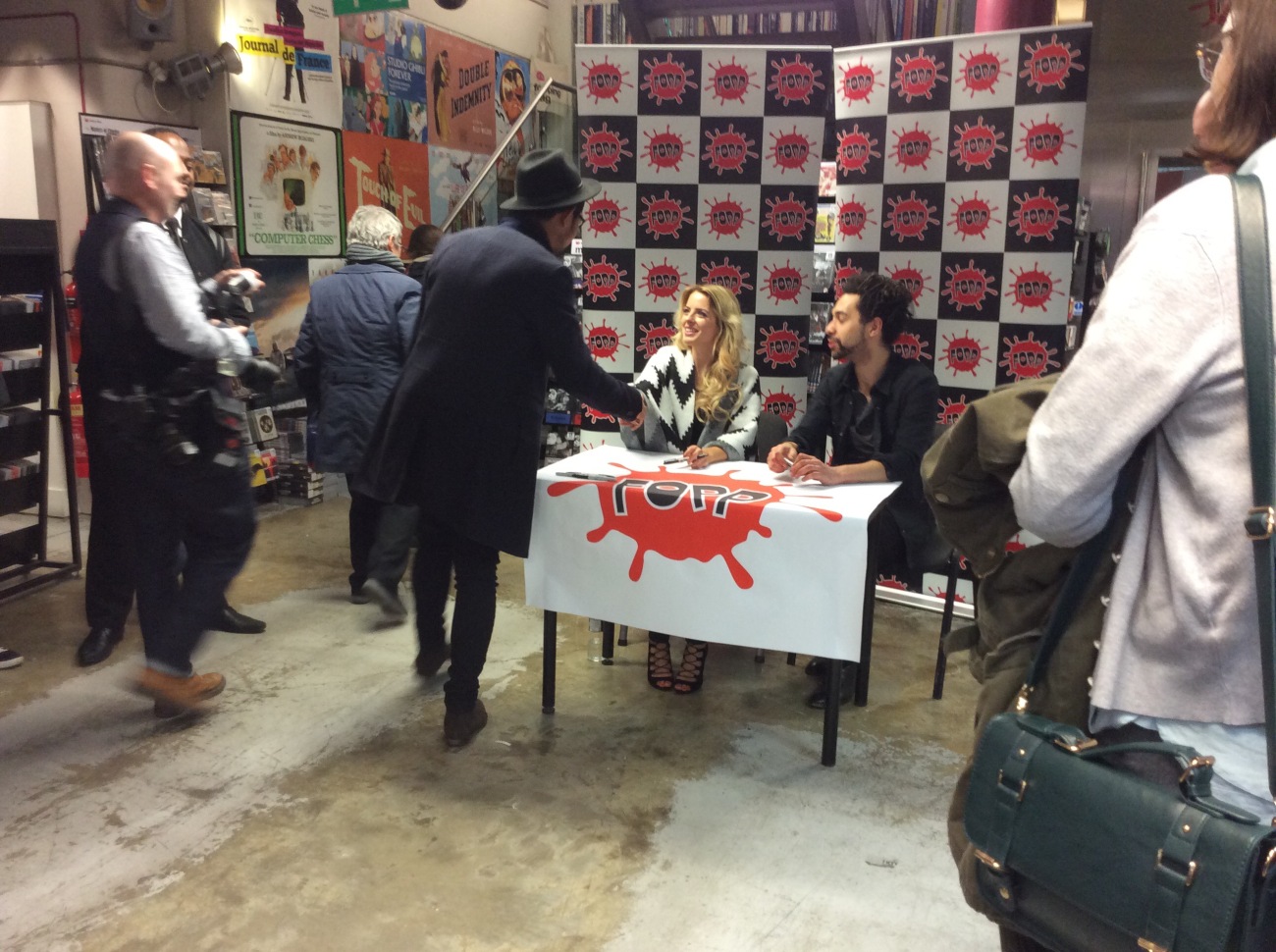 When it was our turn, Jamie and Mikey went first, well I made them go first. They had a good old chat with The Shires and got things signed and took a photo with them. When it was my turn, as per usual, I got a bit shy and awkward – not sure why I do that but I just do. I said how proud I was of them and that their success was well deserved. I gave them my set list I got from when they supported Little Big Town, a CD cover and two promo postcards, as I wanted to have one as a competition prize on the @theshiresfans twitter page.

I then gave them the card I made, I asked them to not open it there as I was so embarrassed. I told them how the card was meant to be cheesy and it was just a congrats card for their first album release. They were surprised and grateful for the card.

In the photo below when I am giving them my card, I may look like I am preaching, but I like to think I am saying “#ukcountry4top10”.

I then took my photo and went on my way.

As we went up the stairs a man from FOPP wanted to take a photo of me and Jamie and our signed goods. I hate being photographed but allowed it. Pretty sure I was swearing though as held up my middle finger to Mikey for taking the mick out of me.

Overall, what a great night to be part of. I am so pleased to have been there for The Shires’ first ever album signing and feel it was only right that we were there. I am so very proud of how far The Shires have come and I always expected great things from them. This was a moment I won’t ever forget and I am sure they won’t either.

To my horror though, we may have thought we were being discreet but Ben and Crissie tweeted and Facebooked photos of our card hahahahaha, Embarrassing,but also really sweet and I am so glad they liked it. I hope they liked the poem I wrote too. It wasn’t a cheesy poem but just a silly one.

I have now got over my embarrassment and am just pleased they liked it so much that they wanted to share it with everyone, so thank you guys x

Hope lots of you either went or are going?

Either way please purchase a copy or two or maybe even three of Brave so that we can get The Shires to an even higher position in the charts.

You can get it here:

Brave (Deluxe) by The Shires

And don’t forget to catch them on tour. Dates and tickets are here: